You hear it all the time when people talk about college football. The word rarely escapes conversation. Parity. Surely that must be the case as no highly ranked teams have really had an astonishing victory against a solid (ranked or nearly ranked) opponent. There have been lots of near upsets, and there have been a fair share of upsets. Like we've been talking about, it seems like this season may shape up like 2007 when no top teams were safe.

Meanwhile, in Week Three, the big headline was Washington knocking off #3 USC at home 16-13 on a field goal in the closing seconds. The picture to the right shows the scene on the field after the game. The other two teams in the top three - Texas and Florida - both won by ten and struggled to put away opponents that they should have "crushed", according to the experts (as Lee Corso would say). #1 Florida defeated Tennessee 23-13, and #2 Texas beat Texas Tech 34-24.

Despite the final score, Miami (FL) looked extremely impressive against Georgia Tech. Playing at home, the Hurricanes jumped out to a huge lead early in the game, and hung on to win the matchup of two ranked teams 33-17. In the other matchup of ranked teams, Nebraska's defense failed in the closing seconds and Virginia Tech scored a late touchdown on a Tyrod Taylor bullet pass to win 16-15.

More fun stuff after the jump!

I Wasn't Aware Of That...
I didn't realize you could get ejected for two unsportsmanlike conduct penalties, but that's exactly what happened to a starting linebacker (Franklin) for Arkansas during the first half of their matchup with Georgia.
Most Valuable Player 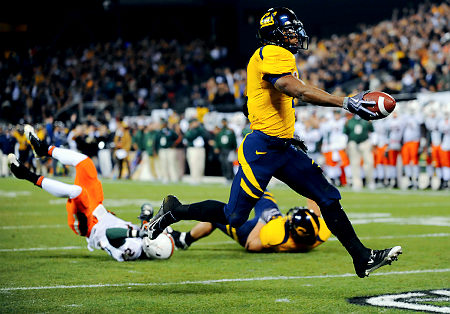 Jahvid Best of California scored all 5 touchdowns for California as they squeaked out a road victory against Minnesota. He's starting to make a case for Heisman as he is averaging 157 yards from scrimmage per game, he's scored 9 touchdowns, and gets about 8 yards every time he touches the ball.

Colt McCoy Has The Flu Remedy

Hat tip to Tim Griffin of ESPN for this amusing story. Apparently Colt McCoy was sick with the flu during the week. He offers an atypical remedy:

Although his symptoms were gone by game time, McCoy said Monday he still felt out of sorts when the game started. The solution? Eating peanut butter and jelly sandwiches at halftime, along with grape Pedialyte, a hydration drink for children.