The Obligatory "We're Still In It" Article

Share All sharing options for: The Obligatory "We're Still In It" Article

After the crushing loss to BYU in the season opener, and with bad injury news about Sam Bradford and Jermaine Gresham, the Sooner fan base was unquestionably skeptical that the Sooners had legitimate national title aspirations. On top of those things, the offensive line was also committing penalties and had major blocking issues, and the wide receivers couldn't hold on to balls that hit them in the hands. Those are actually still issues, to a certain point.

Many people started penciling OU in for a few losses, figured that Oklahoma State was suddenly the best team in Oklahoma, and basically ruled out a climb back into the title hunt.

However, after the first back-to-back shutouts posted by the Sooners since 1987, and a combined 109 points scored in both of those games, the clouds may be lifting for OU. We'll dig into the reasons why Oklahoma appears to still be in the national title hunt, but first a few shoutouts regarding the Tulsa game:

Enough positives though, let's move on to the precise reasons for hope, and the reasons you shouldn't count the Sooners out of the title hunt just yet. 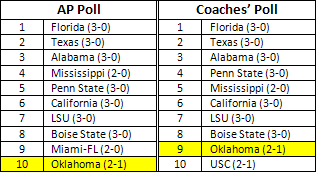 The latest polls just updated today show that Oklahoma has jumped into the Top 10 in both the AP and the Coaches' Polls. Taking a look at these polls is crucial to understanding why the Sooners still have a chance, beyond the obvious observation that they are the highest ranked 1-loss team.

First, the AP and Coaches' Polls comprise 2/3 of the BCS calculation, with the other third consisting of 6 computer rankings. Therefore, where the Sooners are ranked in these "human" polls has a large bearing on where they wind up in the BCS rankings that decide who plays in the national championship game.

Second, the Sooners get to play two teams ahead of them in the AP rankings, and one team ahead of them in the Coaches' rankings (Miami is 13th in the coaches poll). This has two benefits - if they win out they will jump those two teams, and wins over top 10 opponents may jump them over some undefeated teams with a worse strength-of-schedule.

If we operate under the assumption that OU will win the remainder of its games, including the conference championship game, then that means there will only be seven teams ahead of them in the rankings, because they will have defeated Texas and Miami. Since you only need to be in the top two to qualify for the championship game, we only need to be concerned about jumping 6 additional teams. 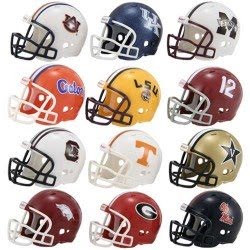 The gauntlet that is the SEC will provide some additional help to the Sooners title hopes. Four SEC teams are currently ranked above OU. Three of them are from the SEC West (Alabama, LSU, Mississippi), which guarantees that, at best, only one of them will be undefeated by the end of the season. It's possible they'll all knock each other off. Even if there are two undefeated SEC teams by the end of the season (unlikely), they would meet in the SEC championship game and only one would advance to the BCS National Championship game. We saw how voters view "rematches" when Ohio State and Michigan met a few years back - and it seems like a rematch of a conference championship game is unlikely to occur. Therefore, if OU wins out (and that's a big if), we would likely jump three other teams as well, possibly four depending on how the SEC season goes. This leaves three more teams to be worried about, and these are the teams you should follow closely over the next few weeks. We'll give you a quick breakdown of their schedules:

If you believe that Penn State and California will both have losses by the end of the season, and that Boise State will either lose or the non-BCS conferences will continue to get shut out of the championship game, then Oklahoma basically controls it's own destiny with regards to reaching the BCS title game. 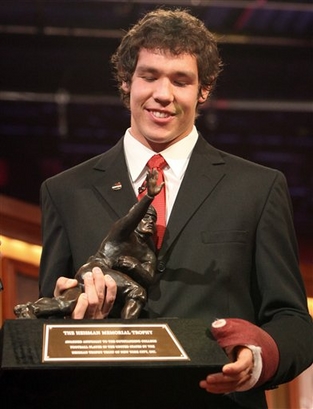 Oh, the memories...
The other perfectly legitimate question is whether or not a team could catch OU from behind? I think that OU is the 1-loss team with a unique combination of having a quality opponent that they lost to, losing early in the season, and having many ranked teams left on their schedule (5 using the AP Poll). Therefore, I think that it's unlikely, and there's a reason why the Sooners are the highest ranked 1-loss team right now.
Of course - and I'll bold this for emphasis because it's important and I'm sure I'll get comments about it unless it's mentioned - this entire discussion is moot if Oklahoma doesn't win out. The Sooners right now need to keep their focus away from poll-watching, and keep their eyes on the prize. Can they beat Miami without Sam Bradford? Will they be able to beat Texas, even with Sam Bradford? Can they play consistently enough to win in perhaps the nation's toughest conference? All of these are questions that we don't have the answers to.
The point of this article is merely to show that it's very realistic for the Sooners to climb back into the title hunt. In order to do this, the defense needs to keep playing at a high level (shutouts are always welcome) and the offensive line and receivers need to continue to improve.