Share All sharing options for: Things We Learned In College Football - Week Two

College football is two weeks into it's wonderful season, and it seems like it already has the makings of a wild season, much like the 2007 season that brought us the sport's first 2-loss national champion. Crazy things have already happened, but before we launch into the entire college football world, let's make a few points about the Sooners' 64-0 victory over the Idaho State Bengals:

As I alluded to in the introduction, this season has all the early signs of a crazy one. Obviously our loss to BYU was one of those red flags, but there have been some other interesting games as well. Before we talk about those, I will defer to this ESPN article which summarizes the point I'm trying to make quite nicely:

The first two weeks of the 2009 college football season looked a lot like two years ago, when ranked teams seemed as safe as Virginia coach Al Groh's job.

The 2007 season opened with defending FCS national champion Appalachian State shocking Michigan 34-32 in the Big House. Over the next 14 weeks, the country's No. 2-ranked team would lose six times. Non-traditional powers such as Boston College, California and South Florida briefly climbed to the sport's penthouse, and Stanford -- a 41-point underdog -- shocked USC at the Coliseum.

What's been so crazy about this season, you ask? Virginia, a team from the ACC (a "BCS Conference"), lost at home to William and Mary, an FCS team. Not to be outdone, Duke (ACC) lost to Richmond (FCS) at home as well. Boise State steamrolled Oregon on the smurf turf, and BYU knocked off #3 Oklahoma in Arlington. Both of those teams are from "non-BCS conferences" and have seen their stock rise in the rankings. Oklahoma State beat Georgia soundly, causing them to jump up in the rankings to #5, only to be defeated at home one week later by unranked Houston. Another FCS team almost notched another victory over an ACC team as Jacksonville State led Florida State for most of the game before the 'Noles scored two touchdowns in the last 35 seconds of the game. Not to mention, Central Michigan knocked off Michigan State in East Lansing with a thrilling and improbable comeback late in the 4th quarter. And that was only some of the insanity from the first two weeks! 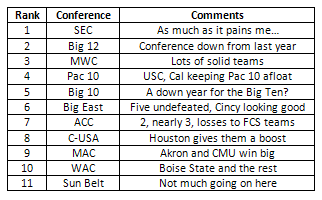 The Big 12 is an interesting conference this year. There are still some very solid teams at the top, but the bottom end of the conference seems to have gotten worse. Iowa State didn't even look competitive against Iowa, although that's more than you could say for the likes of Kansas State and Colorado. The Wildcats lost to Louisiana-Lafayette a week after barely beating FCS Massachusetts. Colorado, meanwhile, is 0-2 after losing to Colorado State and then getting throttled by Akron. We also have to point the finger at ourselves as Sooners, as we got upset by BYU. Granted, BYU is looking like a really solid team after manhandling Tulane 54-3. Oklahoma State also dropped one to Houston at home only a week after attaining the #5 ranking and seemingly verifying everyone's suspicions that they may crack the BCS this season. However, Oklahoma and OSU are still two dangerous teams, and Kansas, Nebraska, Texas, Texas Tech, and even Baylor all seem as though they will be dangerous as well. Nevertheless, the Big 12 seems to have lost a little of the magic from the 2008 season.

The SEC, for the time being, seems like the best conference from top to bottom this year. The teams at the bottom of the SEC are certainly better than those in the Big 12. Florida seems like it will have an easy run through the East Division this season, while the SEC West will be extremely competitive with Mississippi, LSU, and Alabama all having ambitions of reaching Atlanta, and Arkansas and Auburn both still undefeated.

The Mountain West Conference may single handedly reshape the way the college football post-season is done. The conference currently has three teams ranked in the AP poll (BYU #7, TCU #15, Utah #18). They have scored some impressive victories over the past few seasons, including Utah's stunning dominance over Alabama in last year's Sugar Bowl. The Mountain West also has some decent teams from top to bottom. Despite all of that, the conference still doesn't get an "automatic BCS bid", which seems unfair when the ACC does - a conference that has had two teams drop games to FCS opponents already this season, and another that almost dropped a third. USC and California are both still looking solid in the Pac-10, but beyond those two teams, there doesn't seem to be many others challenging to reach the top-25.

Meanwhile, the Big 10 is looking like every team could have 1 to 2 conference losses, as none of the teams seem dominant. Minnesota struggled against Syracuse. Wisconsin barely squeaked by Fresno State at home. Iowa barely beat Northern Iowa (FCS). Northwestern barely beat Eastern Michigan. The list could go on and on. 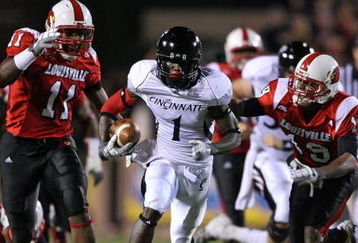 Odds and Ends
Congratulations to Washington for beating Idaho and snapping a 15-game skid that stretches back to 2007...I feel bad for Miami (OH) who has been outscored in their first two games by a combined score of 90-0...When was the last time UCLA went 3-0 to start a season? They have a good chance to reach that mark when they host Kansas State next week...USC QB Matt Barkley is riding a wave of media love right now after piloting a long scoring drive to win the game. However, his 48% completion rate and interception vs. no touchdowns suggest to me that USC is very beatable this year...Auburn has been running the ball very well, totaling almost 700 yards on the ground in the first two games...The latest bowl projections are in and apparently one person thinks that Oklahoma State is still going to the Fiesta Bowl...Tennessee fans are probably growing restless after the second defeat to UCLA in two years, and Jonathan Crompton throwing three picks...The Virginia Cavaliers have twice as many turnovers as touchdowns. Yikes!...Boise State's defense has been superb, not giving up a touchdown pass and only giving up 8 points in two games. Not surprisingly, they are at the top of a lot of defensive stats.
Next Week
Reunion: USC visits Washington and the Huskies will be coached by Steve Sarkisian, former USC offensive coordinator.
Gameday: ESPN's morning college football show heads to Austin. Texas Tech rolls into town fresh off of a big win over Rice, a win in which Taylor Potts threw 7 touchdowns.
Don't Miss: #14 Georgia Tech visits #20 Miami in an early ACC showdown on Thursday Night.
Uh Oh: Lane Kiffin made some pretty snappy comments about Florida in the offseason, even accusing Urban Meyer of recruiting violations. Don't be surprised to see things get ugly for the Vols when they visit the Swamp.
Most Intriguing: #19 Nebraska visits #13 Virginia Tech. Va Tech has a tough non-conference schedule, and surely they will be looking to avoid a second loss this early in the season. Meanwhile, we find out if Nebraska is legit.
Can They Win One: Colorado hosts Wyoming, who put up a huge fight against Texas on Saturday. Virginia heads off to play Southern Mississippi, who is currently undefeated.