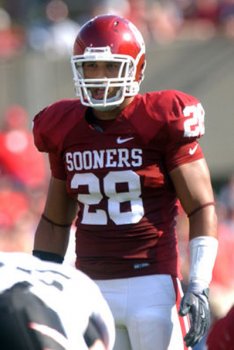 Linebacker Travis Lewis was an outstanding surprise for the Sooners in `08   PHOTO via ouinsider.com

A position that was initially thought to be thin at the beginning of last season actually turned out to be stocked with talent and now returns three starters in `09. In ’s season opener last season the linebacker corps featured a converted safety in Keenan Clayton, a converted running back in Travis Lewis and OU’s lone returning starter at linebacker, Ryan Reynolds. Clayton finished third on the team in tackles, Lewis was first and while Reynolds went down with a knee injury in the game his departure made way for guys behind him on the depth chart to gain experience.

Starter – Keenan Clayton, Sr: His 82 tackles were the third most on the team last season. He also recorded 10 tackles for loss which was the fourth highest on the team. Clayton set an OU record in 2008 with six forced fumbles. His nine pass breakups were the second most in a season for an OU linebacker.

J.R. Bryant, Sr: Played mostly on special teams in 2008 where he recorded 16 tackles. Against he foiled an attempted fake punt and he also recorded a half-sack against Texas Tech.

Starter – Ryan Reynolds, Sr: Before his injury during the game, Reynolds was setting the pace for ’s linebackers. He recorded 10 tackles against TCU and 14 against Baylor.

Mike Balogun, Sr: Saw his playing time increase after Reynolds was injured. Started the State game as well as the BCS Championship game where he recorded six tackles which was a season high for him.

Starter – Travis Lewis, So: Lewis was the biggest surprise on the defense last season. He led the team with 144 tackles and was named the Big 12’s Defensive Freshman of the Year and the Defensive Newcomer of the Year. He tied Brian Bosworth’s record with 19 tackles in the game and broke the Boz’s record for tackles in a season.

Jaydan Bird, Fr: Ranked as the nation’s 23rd inside linebacker by Rivals and the Number 3 player in the state of .

Other Guys To Keep An Eye On

Box, So: Why he’s not on the depth chart is a mystery to me. Box played in 10 games last season and started four games after Reynolds went down. He recorded 8 tackles against A&M and 9 against and Texas Tech. If he’s healthy he won’t be off the depth chart much longer.

Brandon Crow, Jr: Was Brent Venables first choice after Ryan Reynolds went down and despite recording 5 tackles in the second half of the game he was the guy the Longhorns picked on. With another year of experience under his belt, Crow should be more than a capable backup for the Sooners in `09.

Tom Wort, Fr: Was the nation’s 7th ranked inside linebacker by Rivals.