Share All sharing options for: Scouting BYU: The Offense

Max Hall, QB for the BYU Cougars (via Hazboy) 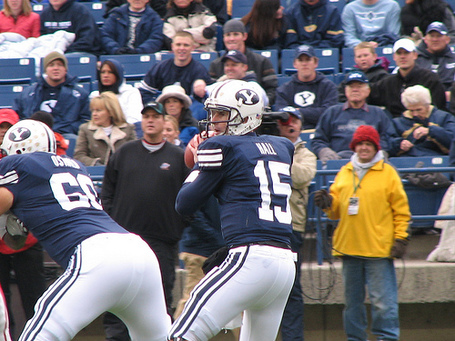 Quarterback: Max Hall enters his senior campaign Saturday night against an secondary that was tested often and at times failed miserably in 2008. Hall had is not so great moments as well in `08, particularly at the end of the season when as the Cougars finished with consecutive losses to Utah and Arizona, but the overall product on the field was very good. He completed 330 of 477 passes for 3,957 (11.9 yards per catch) with 35 touchdowns to 14 interceptions.

Running Backs: BYU’s running back duo of Unga/Tonga sounds like some sort of toy manufacturer but they aren’t a group of backs to be taken lightly. The Cougar’s offense became a lot more potent last week when Manase was cleared by the NCAA to play this season. In 2007 rushed for an average of 3.5 yards per carry and 8 touchdowns. He doesn’t have breakaway speed so he’s not going to kill you on a long run but he’s a bruiser who can plow his way forward in short-yardage situations. With not eligible to play in `08 Unga at to strap up without is `07 backfield mate. The result was a slight decrease in production as he rushed for 95 fewer yards and two less touchdowns than the previous year. Probably not enough to get excited over but the point is that these guys function better when on the field together.

Tight End: The Cougars have a legitimate All-American candidate (He’s have to edge out Jermaine Gresham) in tight end Dennis Pitta. After spending four years together he’s almost sure to be one of Max Hall’s go-to guys. Last season, as a junior, he hauled in 83 catches for 1,083 yards and 6 scores. At 6-5/247, Pitta could prove to be a bit of a match-up problem.

Receivers: Austin Collie caught 106 passes for 1,538 yards and 15 touchdowns last season. He’s gone in 2008 and while the young Cougar receivers may have talent they aren’t very experienced. The 2009 corps of McKay Jacobson, O’Neill Chambers, Luke Ashworth and Spencer Hafoka had a combined 7 receptions in `08. This unit could turn out to be fine (actually BYU needs them to) but for now they have to be labeled as a question mark because of their inexperience. Line: The average size of BYU’s offensive line is 6-4/325 which is a good sized line. However, the unit features four new starters and has already decimated by injury before the season has even started. Matt Reynolds, the lone returning starter from `08, suffered a broken hand but will most likely be ready to play Saturday in the season opener. Reynolds younger brother, Houston, suffered a season-ending knee injury and Jason Speredon suffered a season-ending torn rotator cuff. Houston Reynolds wouldn’t have been a starter but Speredon would have. Now BYU’s offensive line has gone from lacking experience to lacking experience and depth. Much like ’s offense, the Cougars have playmakers at the skill positions but ultimately the success of the offense rises and falls on the performance of the offensive line.