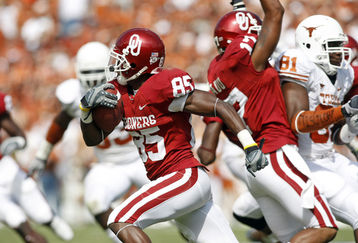 As we heard over and again last season there wasn’t anything at all special about ’s special teams in 2008. From missed extra points and field goals to blown coverage on kickoffs it was often an exercise in futility when the special teams unit took the field. I think that Bob Stoops was the only person in the world who thought that Jimmy Stevens was going to make that field goal in the BCS championship game, the rest of the world though that it would turn out…well…like it did.

Finding a solution to these woes has been the task of ’s coaching staff this off season and now that fall camp is underway the competition is heating up. With open races at kicker, punter, return men and an expectation for the coverage guys to actually cover or suffer riding the pine, OU’s special teams are primed to be a contributor to success on the field rather than a detractor of it.

This position actually seems to be settled. While DeMarco Murray could still be a factor in kickoff return yards it appears that the coaching staff would prefer him not after season ending injuries the last two years on kickoffs. Should either Franks or Broyles be removed due to performance or injury, expect JUCO transfer Cameron Kenny to get a shot before . However, is the only guy on the team now who actually returned a kickoff in `08.

Dominique Franks, JR: Averaged 5.8 yards per return on punt returns last season but was only allowed six opportunities. His longest punt return was 17 yards and it came against .

Ryan Broyles, SO: Averaged 9.9 yards per return on punt returns as ’s leading man in the position. His longest return of the season was a 69 yarder for a touchdown against .

Tress Way
is penciled in as the starter at this point but he’s being pushed by Cameron Kenny who averaged 47 yards per kick at Garden City Community College last year. Stoops has already said that he likes the idea of Kenny back to punt because of the other "options" that he brings so expect there to be a two man punting unit in `09.

Jimmy Stevens, SO: Set a school record for the most extra points attempted and extra points made in `08. Kicked a career long 42-yard field goal against Texas A&M. He made 8-of-11 field goal attempts and 92-of-97 extra point attempts. Stevens was named to the 2009 Groza Award watch list.