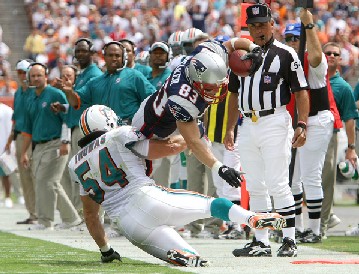 You won’t find any Red Raiders in the Pro Football Hall of Fame, and to be honest you’ll be hard pressed to find a major contributor among the fourteen former Tech players currently on NFL rosters. That doesn’t mean that they aren’t there though. In fact there are two guys who are obvious and could, in fact, find themselves in someday.

What this means is that Texas Tech will be the second team whose greatest NFL player is currently still playing. Zach Thomas was a fifth round draft pick by the Miami Dolphins in the 1996 draft. Immediately he made an impact for and was named to the `96 All Rookie Team. He made his first of seven Pro Bowl appearances (All with ) in 1999 and was a consecutive selection from `99 to 2003. He also went to in `05 and again in `06. In 2008 he parted ways with the Dolphins and signed a one year deal with the Dallas Cowboys. Now he’s back in the AFC as a member of the defense. Over the course of his career he’s registered 1,733 tackles, 20.5 sacks and 17 interceptions.

Wes Welker went undrafted in 2004 but signed a free agent deal with the San Diego Chargers. After being cut that same year he joined the Miami Dolphins where he made a name for himself as a kick and punt returner. Following the 2006 season Welker was traded to the New England Patriots and was a contributing member of the 2007 undefeated regular season. That year he set a franchise record for receptions by hauling in 112 passes for 1,175 yards (10.5 ypc) and 8 touchdowns. In ’s Super Bowl loss to the New York Giants he also tied a Super Bowl record with 11 receptions. Since signing that free agent contract in 2004 Welker has caught a total of 319 passes for 3,461 yards and 12 touchdowns. He made his first Pro Bowl appearance in 2008.

While the career of Zach Thomas may be winding down Wes Welker is just hitting his prime and the majority of his story is yet to be written. That’s why, for now, we’ll have to go with Thomas as the greatest Red Raider to play in the NFL.