Share All sharing options for: Big 12’s Twelve Players To Watch In `09: No.5 Sergio Kindle 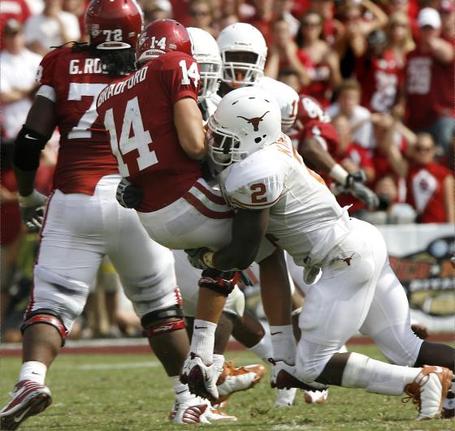 Kindle Likes Crashing Into Quarterbacks Almost As Much As Apartment Buildings

If Sergio Kindle is driving a car it’s quite possible that the safest place to be is in the middle of the road. However, when he’s charging hard on the football field you won’t want to be anywhere around him because he’s one of the Big 12’s hardest hitters. A linebacker for most of his career at , the Longhorns are taking advantage of his speed and 6-4/255 frame by putting him on the line as a defensive end.

In 2008 he was a Second Team All-Conference selection. He played in all of UT’s 13 games, starting 11 of them. In those games he recorded 53 tackles (14 for loss), 10 sacks, 2 pass breakups, 2 fumble recoveries and a forced fumble. His best game in `08 came in the Longhorns loss to Texas Tech. In that game he recorded six tackles, four qb pressures, a sack and a forced fumble.

With the departure of three of the Longhorns four starters on the defensive line, Will Muschamp is counting on Kindle to provide the type of productivity and leadership that will be essential to defensive success in `09. If Kindle struggles at defensive end (a position he played sparingly last season) the pass happy Big 12 offenses will much more difficult to contain than they were with Brian Orakpo and company last year.