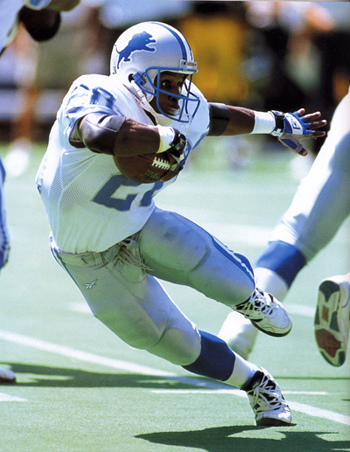 Barry Sanders was simply amazing to watch...even for a Cowboy.  (Photo via cmassi02)

This is the easiest of the series because not only was Barry Sanders the best running back to come out of Oklahoma State he’s the best running back to ever play the game. The Cowboys currently have 19 players on active NFL rosters including ’s Kevin Williams and the New York Giants R.W. McQuarters. They’ve also had some of the NFL’s all time greats in players like Dexter Manley and Leslie O’Neal but the two most notable names to come from are running backs Barry Sanders and Thurman Thomas.

Not only are both backs in the Pro Football Hall of Fame they are also the only two representatives of in . Thomas appeared in four consecutive Super Bowls with the Bills, was a five time Pro Bowl selection, the 1992 NFL Offensive Player of the Year and the 1991 NFL MVP. He gave us memorable moments like missing ’s first two offensive plays of Super Bowl XXVI because he couldn’t find his helmet. Thomas rushed for 12,074 yards and scored 88 touchdowns over the course of his 13-year career but as good as he was he failed to dazzle like Barry Sanders.

Barry Sandars abruptly retired in the summer of 1999, still on top of his game. In 1997 he became the first running back in NFL history to record 10 consecutive seasons 1,000 yards rushing. He was inducted into the Pro Football Hall of Fame in 2004. He holds 10 Detroit Lions team records.