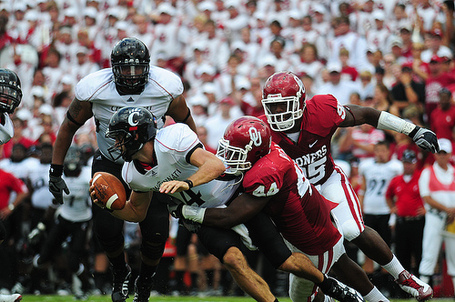 returns one of the best defensive lines in the nation in 2009 that’s not only stacked with talent but also experience. Should they remain healthy they’ll comprise a unit of run stuffers and pass rushers that’s unrivaled in the Big 12. Defensive Coordinator Brent Venables likes to rotate his linemen and there is no shortage of personnel in this year. Gerald McCoy leads this cast of defenders but by sharing the field with Frank Alexander, Jeremy Beal, Auston English and DeMarcus Granger he’s a long way from being the only star.

Gerald McCoy, Jr. – A First Team All Conference selection in 2008, McCoy was also the conference Defensive Freshman of the Year in 2007. His 30 tackles led ’s defensive tackles last season and he was second on the team in sacks (6.5). He also recorded 11 tackles for loss last year as a sophomore.

Adrian Taylor, Jr. – Started all 14 games last season as a sophomore. He was just behind McCoy for tackles by a defensive lineman and placed third on the team with 4.5 sacks. In the BCS Championship game he registered a career high 6 tackles against .

DeMarcus Granger, Sr. – Was a member of the Big 12’s All Conference Second Team in 2007 only to have his `08 campaign limited to injuries.

Cordero Moore, Sr. – Has spent his career at OU as a reserve but has also made the most of his opportunities. Last season he registered a career-high three tackles versus Texas Tech, forced a fumble against Texas A&M and broke up a pass against TCU.

Jamarkus McFarland, Fr. – Was listed as one of the nation’s top defensive recruits in the 2009 recruiting. Has tremendous upside and could work his way onto the field as a true freshman but could also receive a redshirt.

Auston English, Sr. – After being a First Team All Big 12 selection in 2007, English was limited to seeing actions in 11 games in `08 because of a knee injury. He recorded 32 total tackles, 9 tackles for loss and 4.5 sacks last season.

Jeremy Beal, Jr. – Was a first team All Conference selection last season after leading the team in sacks (8.5) and tackles for loss (15.5). He recorded 61 tackles in `08 which was the most among ’s defensive linemen.

Frank Alexander, So. – Recorded 21 tackles and 3.5 sacks in `08 while giving OU valuable minutes in filling in for injured starters.

David King, RS Fr. – Was listed as the nation’s number eleven defensive end by Scout before signing with the Sooners as a part of the 2008 class.