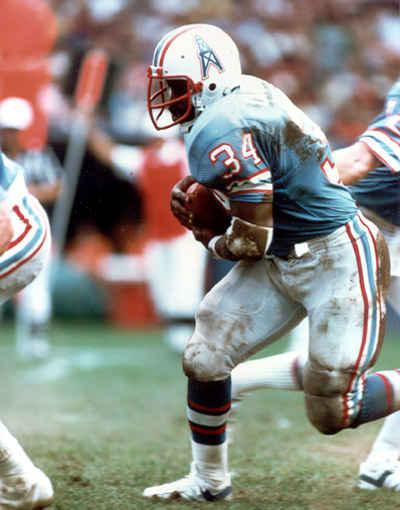 Earl Campbell was one of the most punishing backs to ever play the game.

There are 49 players on current NFL rosters that played their college ball in a burnt orange jersey. Among them are guys like kicker Phil Dawson, Chargers corner Quentin Jammer and running back Ricky Williams.

If you’re looking for NFL greatness with a connection then the search won't be very difficult. One of the greatest NFL icons ever hails from the . In his playing days Tom Landry was a cornerback for the New York Yankees (1949) and the New York Giants (1950-55). He tallied up 32 career interceptions as a player but his biggest mark on the game would come from the sidelines as a coach.

In 1954 Landry became a player/coach for the Giants and stayed on as the defensive coordinator until 1959. In 1960 Landry was introduced as the new head coach of the Dallas Cowboys and would remain such until 1988. Over the course of his 29-year tenure with the Cowboys he won two Super Bowls (VI/XII), 5 NFC Championships and set a franchise record with 250 career victories. However, this feature is the greatest NFL players and not the greatest NFL icons. While Landry did make the Pro Bowl in 1954 and is in the Pro Football Hall of Fame, he can’t be described as the greatest NFL player from .

After winning the Heisman Trophy at , Earl Campbell was drafted with the first overall pick in the 1978 NFL draft by the Houston Oilers. That year he was a Pro Bowl selection and the NFL Offensive Rookie of the Year. He would go on to make four more Pro Bowls and be named the NFL Offensive Player of the Year three times.

In 6 seasons with the Oilers and 2 for the New Orleans Saints, Earl Campbell rushed for 9,407 yards and 74 touchdowns with a career average of 4.3 yards per attempt. In 1991 he was inducted into the Pro Football Hall of Fame along with fellow alum Hank Schramm.