The Quest For Number Eight

Share All sharing options for: The Quest For Number Eight

Expectations are always high in Norman for the football season. The average season ticket renewal rate is 96% and it hasn't dipped below 94% since Stoops took the head coaching position. This season, if it's even possible, the expectations have soared. Season tickets have been renewed at a 99% rate for the 2009 season, a new record during the Stoops era.

But of course the talk for the new season goes deeper than the significance of season ticket renewals. The "quest for number eight" has been ongoing since 2001 at OU. The fact that the Sooners are still stuck at 7 national championships has nothing to do with a lack of talent. Seven of the eight teams since then have gone on to post win totals of at least 11. Three of those teams have appeared in a national championship game. The fact is that the Sooners have fielded excellent teams, year after year after year for nearly a decade, but they just can't quite seem to get over the hump.

And of course the amount of success, combined with near misses, breeds eternal optimism. Every year around this time, Sooner fans everywhere start throwing around phrases like: "maybe this will be the year" or "we'll be putting another year up on the scoreboard next spring". But what does the road ahead of the Sooners look like? And what are the potential challenges that could crop up?

All of that and more, after the jump!

In all likelihood, the Sooners will begin the preseason ranked somewhere very close to #3 in the AP and Coaches polls, as they have been in most preseason rankings by preview websites and magazines. This means they will probably be trailing Texas and Florida to start the season, and ahead of the likes of USC, Ohio State, LSU, Virginia Tech and Alabama. To be sure, being ranked #3 in the preseason polls is an excellent place to be. However, the Sooners may have a tougher climb than most of the teams in the top 10.

To begin with, defending Big 12 champions Oklahoma will have to navigate one of the toughest conferences in the nation, where spread offenses and sharp quarterbacks will keep most teams in most games. The Big 12 teams that the Sooners will play away from home were a combined 40-12 (0.769) last year. Meanwhile, the teams that they'll play at home were a combined 21-27 (0.438) last year.

On top of that, Oklahoma's non-conference schedule includes some games that aren't exactly gimme's: a neutral site game against BYU, and visiting a talented and athletic Miami team, both of whom were bowl teams last year. Also, they'll play Tulsa in Norman. Tulsa isn't exactly a pushover, either, and they went bowling last year too. 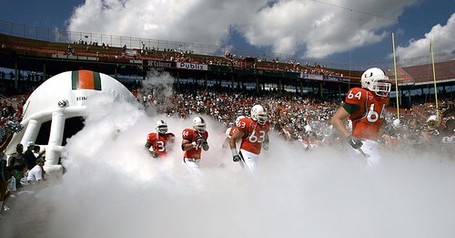 The Sooners have to return to Dolphin Stadium to play an up-and-coming Hurricane squad. (Source)

Meanwhile, most of the teams around the Sooners in the preseason rankings will have a much easier non-conference slate. Texas will play one non-conference road game against Wyoming - a team that hasn't been able to dig its way out of the Mountain West Conference cellar in years. The Longhorns will also play Louisiana-Monroe, UTEP and Central Florida, all within the friendly confines of their own stadium.

Florida has three devastating non-conference games against Charleston Southern, Troy, and Florida International - all at home. The top 10 team that has a tough non-conference schedule somewhat similar to OU would be USC who has to play at Ohio State and at Notre Dame, in addition to San Jose State.

However you slice it, the Sooners will likely have a tougher schedule than most other teams that will be gunning for the national title, much less the BCS. However, every team has games that are looking to be tough:

Plus, with the parity in college football, any team can fall on any given Saturday. But schedules are only one piece of the puzzle. Despite Oklahoma having a fairly tough schedule, they are returning quite a few star players, including reigning Heisman Trophy winner Sam Bradford. The biggest gains from last year look to be made on the defensive end, however, as Oklahoma returns 10 of 11 starters (if you count Quinton Carter, who started part time, as a starter). Bob Stoops on his defense:

This was a defense that definitely hit its stride towards the end of the season, holding a potent Florida offense to 24 points, something that hadn't been accomplished since October 6, 2007 in "Death Valley" against LSU. It was an extremely opportunistic defense last year, despite having 7 first-time starters. They nabbed 19 interceptions in 14 games, and also grabbed 15 fumbles. The 34 turnovers forced put them at 4th nationally.

WIth a stronger defensive presence this year, the Sooners may not need to shatter the record books offensively again. Sure they will be returning a 4,000 yard passer and Heisman Trophy winner in Sam Bradford, along with two 1,000 yard rushers in DeMarco Murray and Chris Brown, but they will still need to replace four starters on the offensive line and two starting wide receivers.

Time will tell whether or not this will be a "shutdown defense" rather than a "bend-not-break defense" that we've grown accustomed to in recent years. Time will also tell whether or not the offensive line will avoid a huge slip after four starters either went to the NFL or lost eligibility. The coaching staff will likely try to field a starting line this year that includes a starter from last year, two players who have had significant playing time at OU already, and two highly regarded recruits.

The storylines are aplenty in Norman this season. With one more victory the Sooners will have had their winningest decade in their storied football history, surpassing the 1970s which also saw 102 wins. They will compete for the 104th time in arguably the single most competitive college football rivalry, as Texas and OU boast the two highest modern era winning percentages. Oklahoma will look to extend it's huge victory margin as the most successful modern era team. They will also look to extend their streak of Big 12 Championships to four. Can Oklahoma reach a bowl for the 11th time in 11 seasons under Stoops? And will they qualify for their 8th BCS bowl game under their popular head coach?

And last, but certainly not least, they will continue their quest for number eight, a quest that would tie them for the top spot in most AP national titles ever.