Share All sharing options for: Big 12’s Twelve Players To Watch In `09: No. 8 Jermaine Gresham 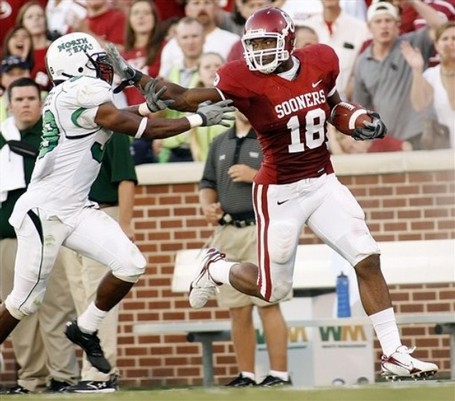 At 6-6/258, Jermaine Gresham is a defensive back's worst nightmare

There hasn’t been a tight end at to draw this much since Keith Jackson was donning the crimson and cream. Already one of Sam Bradford’s favorite targets, ’s workload could actually increase in `09 while is learning to trust a mostly new corps of receivers.

At 6-6/258 is larger than most linebackers which is too much size for a defensive back to handle but his speed also makes it extremely difficult for linebackers keep up with him. He’s a hybrid player who has the hands and speed of wide receiver but also the size and power of an offensive lineman.

In 2008 Jermaine Gresham led the Sooners in receiving touchdowns and was second on the team in receptions and receiving yards. Bradford and Gresham connected 66 times for 950 yards and 14 touchdowns last season which no doubt means that opposing defensive coordinators will give a large amount of their attention figuring out how to shut them down in `09. If the chemistry between Bradford and receivers Ryan Broyles and JUCO transfer Cameron Kenny develops quickly then attempting to shut down the Bradford/Gresham connection is going to come at a steep price.