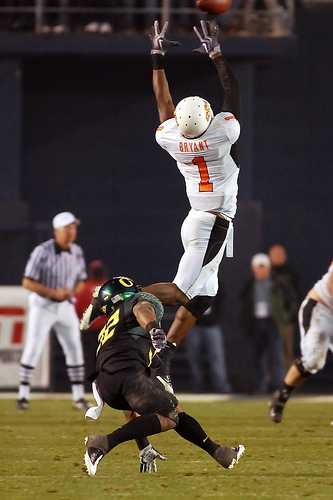 Like it on not the Oklahoma State Cowboys are on the rise in the Big 12 and much of the credit for their sudden surge of success is Dez Bryant. Last season Bryant finished second nationally with 19 touchdown receptions and third in the country in both yards per game (113.9) and yards per punt return (17.94). He was a first team All-American and first team All Big 12 as well as the Big 12 Special Teams Player of the Year.

How impressive was Bryant in 2008? He and teammate Kendall Hunter as ’s first sophomore All-American position players since 1985. He caught touchdown passes in 8 of the teams 13 games and recorded 22 receptions of twenty yards or longer.  His 19 touchdown receptions were a new school record and his 1,480 receiving yards were second best in school history. Against Houston and Baylor he surpassed 200 yards in receiving and had 100 plus yards in games against , Texas A&M, and .

In 2009 the Cowboys return experienced players along the offensive line, an All-American at running back and an All Conference caliber quarterback. Opposing defenses won’t be able to focus solely on Bryant and he’ll have the advantage of going up against defensive mismatches just about every weekend.