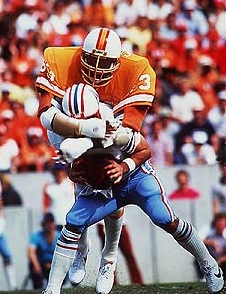 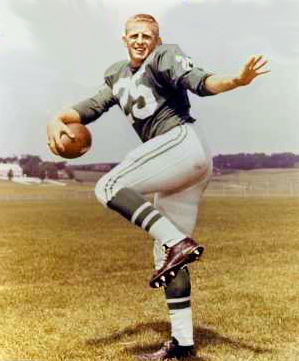 Lee Roy Selmon (left) and Tommy McDonald (right) were both stars on the defensive and offensive sides of the ball respectively.

Alright, here’s the big one. I started to save this one for last but why break up the whole alphabetical order thing we’ve got going? There are currently 37 former OU football players on NFL rosters. Among them are the Saints’ Jammal Brown, ’s Mark Clayton, ’s Tommie Harris, ’s Curtis Lofton and ’s Adrian Peterson. Among those players I believe that it is Peterson who will one day be labeled as ’s greatest. Barring injury, his career will land him in alongside some other former Sooner greats.

However, you can’t be considered the greatest NFL player from a particular school if you are still playing because your history is still being written. That said we need to look at some of the NFL greats to come from OU who have their playing days behind them. That list would include guys like Bob Kalsu, Steve Zabel, Greg Pruitt, Rod Shoate, Joe Washington, Uwe von Schamann, Scott Case, Steve Sewell, Tony Casillas, Keith Jackson along will Hall of Famers Tommy McDonald and Lee Roy Selmon.

How do you sift through that list and come away without controversy? My opinion is that Keith Jackson belongs in the same conversation with McDonald and Selmon but having not yet been inducted into the Hall of Fame we really cant put him in the same class as those guys. Despite six Pro Bowl appearances, 5,283 receiving yards, 49 touchdowns and a Super Bowl Championship, still doesn’t have the words Hall of Famer in front of his name. That leaves us with just McDonald and Selmon because I don’t consider Troy Aikman to be a Sooner, his glory days came at UCLA.