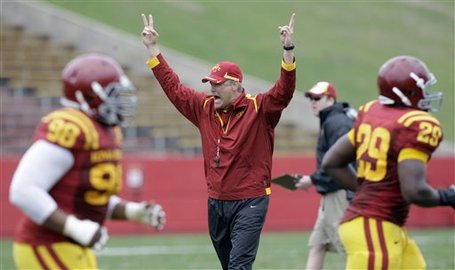 As we inch closer and closer to the 2009 college football season we’re doing our best to put out previews and conversation starters for all of the Big 12 schools. Obviously the Sooners are our primary concern but we aren’t going to ignore the rest of the conference either.

One of the teams that you won’t find on ’s schedule in `09 is the Iowa State Cyclones. Looking to return to bowl eligibility status and make their way as a contender in the north in 2009, the Cyclones will be led by new head coach Paul Rhoads. With all the things he has going on, Coach Rhoads recently gave us the opportunity for a quick Q&A to which we are greatly appreciative.

CC Machine: Taking the helm at ISU is a homecoming of sorts for you. Not only did you serve on Dan McCarney’s staff from 1995-99 but you also grew up in close proximity to Jack Trice Stadium. How has your familiarity with the program and the area helped you hit the ground running?

Coach Rhoads: The staff and I have been immediately received by the people of the state and the warm reception has bolstered our recruiting efforts as we made contact with all the coaches in the state of .

CC Machine: The Cyclones are coming off a two win season but were only three conference wins away from finishing ahead of and in the North. What are your expectations for the `09 ISU football team?

Coach Rhoads: The expectations of the 2009 Cyclone football team are simple.  We want to improve in every single phase of our program.  There is room for improvement everywhere and by focusing on this the wins will follow.

CC Machine: As a defensive coordinator at both and , you’ve been scheming against offenses from the Big East and the SEC the last several years. What do you see that’s different in the Big 12 offenses than what you’ve faced the last nine seasons in other conferences?

Coach Rhoads: Every league has its similarities and differences with each other and we will discover this thoroughly as we go through each opponent.

CC Machine: Last month the Big 12 Coaches voted in favor of keeping the current tiebreaker system. After all the controversy we saw last December, what are your thoughts on the current system and do you believe that it benefits the conference?

Coach Rhoads: The goal of the conference is to fairly produce a champion and give our league an opportunity to compete for the national championship and I think the (current) tiebreaker system puts us in position to accomplish these objectives

CC Machine: isn’t on your schedule on `09 so I’m hoping that you’re willing to about the Sooners just a little bit. If you had to do a quick scouting report on OU, how would you size them up?

Coach Rhoads: No idea.  Since we don't play them we haven't studied them.

He’s definitely not tipping his hand on anything but its only June and would be quite unfair to expect otherwise. Thanks again for your time, coach. Best of luck to you and the Cyclones on the upcoming season.

You can follow the Iowa State Cyclones at SBN's Clone Chronicles.