Share All sharing options for: Big 12’s Most Embarrassing Non-Conference Games Of 2009 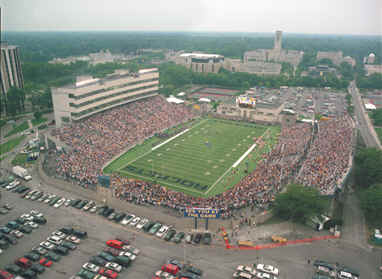 The start of the football season is the one time in which every team is on an even keel as far as records go. Obviously the goal is to keep the perfect record intact for as long as possible which leads to some interesting matchups. Feeding on teams from lesser conferences has long been a practice of the power conferences and the Big 12 is no exception to this. Some of the non-conference games scheduled in `09 for the Big 12 are bad and then some are just down right embarrassing. Here’s a look at the twelve most embarrassing non-conference games scheduled by Big 12 schools.

12. @ Texas, September 12th  – The Big 12 has a history with the Sun Belt Conference and its mostly filled with boring games against lesser teams. Expect the trend to continue in this one.

10. @ Toledo, September 11th  – did beat last year but this game makes the list because and Miami (OH) were the Rockets only other two wins. The other thing that baffles me about this is that the Buffs are going to to play. I know that things have been down in recently but seriously, on the road at ?

9. North Dakota @ Texas Tech, September 5th  – The Fighting Sioux won six games last season but only beat by three points. That says a lot because as we’re going to discuss in a minute the Bengals are one of the worst teams in all of college football. What does all this mean? The game will be over by the half.

8. @ , September 3rd  – The Bison are members of the Missouri Valley Conference* and finished  the 2008 season with a 6-5 record. Even if it’s a game against this is a team that has no business playing against Big 12 competition.

6. @ , September 5th  – Bill Snyder is back and so is the watered down scheduling. The Minute Men finished 7-5 in 2008 and were blown out 56-14 when they stepped into Big 12 competition against Texas Tech.

3. Northern @ Kansas, September 5th  – The Jayhawks are really scraping the bottom of the barrel here. The Bears are from the Big Sky Conference and enjoyed a lone victory in 2008 over (More on them in a minute). This will be nothing more than sixty minutes of stat padding for the Fighting Manginos.

2. @ Oklahoma State, September 26th  – Grambling’s only two losses last season were at the hands of and but they saw nothing like ’s offense. The Cowboys could score points in historical proportions.

1. @ Oklahoma, September 12th  – The Sooners open the 2009 season with a more than respectable game against BYU at Jerry World but follow it up with their home opener against the Bengals. As a Sooner fan let me just say that I wouldn’t even want to see the Vandals come to Norman much less . This may be the worst home opener under Bob Stoops. The Bengals won just one game last season and the defending Big 12 Champs should be embarrassed to be hosting them.

* My apologizes to the good people of . They are members of the Conference and not the League as originally posted.