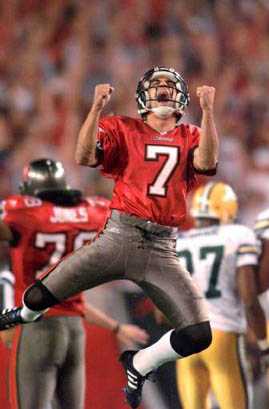 The Kansas State Wildcats have currently placed 27 players on NFL rosters. Among those are notables like linebacker Monty Beisel, Dallas Cowboys defensive back Terrence Newman and running back Darren Sproles.

This could turnout to be one of the more controversial posts in this series but with all due respect to former greats Lynn Dickey and Steve Grogan, I believe that the greatest Wildcat to play in the NFL is still currently on a roster. No, it isn’t Darren Sproles (although he deserves consideration) it’s Martín Gramática. Oh let the controversy begin!

Gramática was a two-time All American for (winning the Lou Groza Award in 1998) and was drafted in the 3rd round of the 1999 NFL Draft by the Tampa Bay Buccaneers. He’s sent spent time with five other teams, including two stints with and his current spot with the New Orleans Saints.

Gramática was a Pro Bowl selection in 2000 and was on the winning side of Super Bowl XXXVII with the Buccaneers. Over the course of his career he has made good on 155 of his 203 field goal attempts (76.4%). Twice (2000 and 2002) he had five field goals of fifty yards or more in a season. Quite possibly one of the most annoying players of all time, Martín Gramática is in my opinion the greatest Wildcat to play in the NFL.