Today is Memorial Day, so take a brief pause from the world of sports and remember those who have paid the ultimate price to make this the greatest nation in the world. 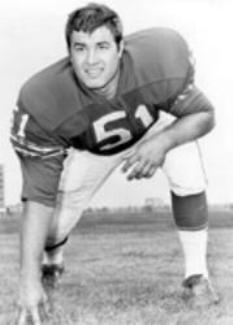 Bob Kalsu was an All-American guard for the Oklahoma Sooners. He was also a member of the ROTC at the and after being selected in the 8th round of the 1968 draft by the Buffalo Bills, Kalsu would leave behind professional sports to honor his ROTC obligations. Before leaving for , Kalsu started at guard for the Bills and played in every game of the 1968 season. Despite being selected as the team’s Rookie of the Year he was off to the United States Army, putting a promising NFL career on hold.

Kalsu arrived in in November of 1969 as a Second Lieutenant. He was posted at Firebase Ripcord in as part of Charlie Battery, 2nd Battalion, 11th Artillery, 101st Airborne Division. On July 21, 1970, he was killed by North Vietnamese mortar fire. He was the only professional football player to be killed during the Vietnam Conflict, dying at the age of 25.

In 1977, Kalsu was recognized by the Pro Football Hall of Fame.

The plaque in his honor reads: "No one will ever know how great a football player Bob might have been, but we do know how great a man he was to give up his life for his country." He also was memorialized by his teammates and the "O" Club with the Benien-Kalsu-Henderson Scholarship. It is presented annually to student-athletes who have completed their eligibility.

In 2000, Bob Kalsu was added to the Buffalo Bills’ Wall of Fame. The Fort Campbell Replacement Company in has also been renamed the First Lieutenant James Robert Kalsu Replacement Company in honor of Kalsu’s sacrifice. Every soldier assigned to the 101st Airborne Division will pass through the building and see a display that features Kalsu's jersey.

Buffalo Rumblings also has a tribute to Kalsu posted today.