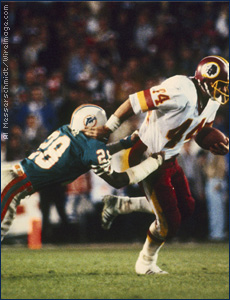 John Riggins was one of the most punishing running backs to play in the NFL.

The Kansas Jayhawks currently have 10 players on NFL rosters including Justin Hartwig from the World Champion Pittsburgh Steelers. Hartwig is the NFL’s highest paid center and most likely the highest profile player from the at this time.

When you look at some of the great NFL players to come from it really is quite astounding. You find names like Nolan Cromwell, Bobby Douglass, Dana Stubblefield along with Hall of Famers Mike McCormick, John Riggins and Gale Sayers.

It’s quite possible that the greatest Jayhawk to ever play in the National Football was Gale Sayers. As a running back for the Chicago Bears, Sayers was elected to the Pro-Bowl four times including three years consecutively from 1965-67. In his rookie year, he scored an NFL record 22 touchdowns (14 rushing, 6 receiving, and 1 each on punt and kickoff returns). He gained 1,374 yards from scrimmage and had 2,272 all-purpose yards (also a record at the time). However, Sayers’ career was cut short because of injuries and despite being the youngest player to ever be selected into the NFL Hall of Fame his full potential was never reached.

That leaves John Riggins as our choice for the greatest Jayhawk to play in the NFL. Riggins was taken with the 6th pick of the 1971 draft by the New York Jets. He played played 14 seasons in the NFL from 1971-1985 (He took the 1980 season off) for the Jets and the Washington Redskins.

Riggins rushed for 11,352 yards and 104 touchdowns over his career and was selected to go to the Pro Bowl in 1975. He rushed over 1,000 yards five times in his career and over 100 yards in 35 games, including a then-record six in the post-season. He rushed 251 times for 996 yards and 12 touchdowns in nine post-season contests. He was the second player ever to rush for over 100 touchdowns in NFL history, and the first to do it since Jim Brown, who did it in 1965.

It was in 1982 that Riggins really set himself apart by pounding NFC playoff opponents Detroit, Minnesota and Dallas for a total of 444 rushing yards. He followed that up by rushing for a Super Bowl record 166 yards on 38 carries in Washington’s 27-17 victory over the Miami Dolphins. It was a performance that earned him the Super Bowl MVP Award. He was elected to the Pro Football Hall of Fame in 1992.