So, unless you've been living in a cave lately, you've probably at least heard the word Twitter spoken. For those of you who don't know, Twitter is a social networking site that allows people, or organizations, to post quick updates or thoughts on what's going on in their lives.

There has been an increasing usage of Twitter by athletes and coaches, and even teams and athletics departments. It is an easy way to keep people up to date on the latest news. Heck, even journalists are using it to give readers quick access to the big headlines.

One of the most popular athletes to use Twitter has been Shaq (here's his Twitter page). To Shaq's credit, he has been very interactive in his Twitter use, often "tweeting" back at fans. Also to his credit, he's hilarious and so it's entertaining to read - probably why he has over a million followers right now.

So, it's not a surprise to see some people with OU connections start tweeting. Here's the ones that I could find (post in the comments if you know of any more):

Looks like Blake has been the one who has kept up with it the most (besides the Athletics Department who basically posts everything they put on their main page). Jeff Capel is also doing a nice job. Hopefully they'll keep getting more entertaining. It's nice to get a little window into their thoughts, however small that window may be.

With that, on to more sour news, which is that Juan Pattillo has been dismissed from the basketball team. You can scroll down to read the story I just posted, or click here.

On the other bball court, a major congratulations are in order for Whitney Hand and Danielle Robinson who were both named to the 14 finalists for the USA's World University Games team. Hand was one of only 2 freshman who made it that far. The roster will get pared down to 12 in June, and those people will make it to Belgrade, Serbia to represent the United States. With only 2 people being eliminated from here, it's extremely unlikely both Robinson and Hand will be eliminated. Said Robinson:

"I have been through this experience before and didn't make the team," Robinson said, "so it feels good to be named one of the finalists. It's great to be recognized as one of the elite players and to be playing with the nation's best players, so I'm definitely excited about the opportunity." 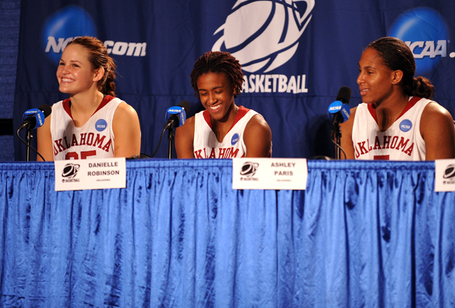 Finally, from the baseball diamond, OU recently swept the A&M Aggies (h/t subliminalnirvanaist in FanPost). The Big 12 pool stage bracket is set. Details are available here (Sooner Sports). They will have to be the best of the group including Texas A&M, Texas Tech and Missouri. The winner of this pool will advance to play the winner of the other pool in the Big 12 championship game.