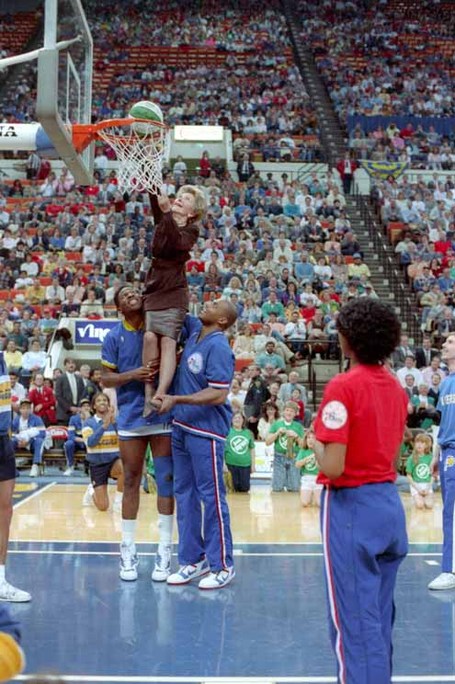 Wayman Tisdale (left) along with Charles Barkley on the assist to former First Lady, Nancy Reagan. via www.reagan.utexas.edu

It is truly a sad day for not just the Sooner Nation but the sports world as well. One of the all time greats, Wayman Tisdale, succumbed to cancer and passed away this morning at hospital in .

Widely considered the greatest player in OU men's basketball history, Tisdale was the first player in collegiate history to be named a first-team All-American by the Associated Press his freshman, sophomore and junior seasons (1983-85).  He was also a three-time Big Eight Conference Player of the Year and boasted career averages of 25.6 points and 10.1 rebounds per game, as well as a .578 field goal percentage (second best in school history).

As a sophomore during the 1983-84 season, Tisdale scored a school-record 61 points against Texas-San Antonio, a record that still stands. – SoonerSports.com

Even through his battle with illness and the amputation of his right leg, Tisdale remained upbeat and made numerous public appearances flashing his contagious smile as recently as last week. A personal message from Tisdale to Sooner fans was broadcast on Sooner Vision during TCU football game last September bringing the crowd to its feet in applause.

"Wayman Tisdale is one of the best people I have ever had the privilege of knowing. He had an incredible gift of making the people who came in contact with him feel incredibly special.  His basketball talent and accomplishments pale in comparison to the impact he had on the lives that he influenced by the way he lived his life, and the tremendous character he displayed in his fight with cancer.  Throughout it all, he always had that infectious smile.”

"This is an incredibly sad day as we have lost not only one of the greatest Sooners ever, but one of the all-time best people to walk the face of this earth." – Jeff Capel

After leaving , following his junior season, Wayman Tisdale was selected by the Indiana Pacers with the #2 pick in the 1985 NBA draft. He would spend the next twelve seasons in the NBA with the Pacers, Sacramento Kings and Phoenix Suns. He averaged 15.3 points a game over the course of his career. He was also the leading rebounder for the 1984 gold medal winning Olympic basketball team.

Tisdale was also an accomplished jazz musician who won several awards and had many of his albums listed among Billboards Top 10.

In 1997 Wayman Tisdale became the first student-athlete to have his jersey retired. Last month he was elected to the college basketball hall of fame. He died at the age of 44.