The April 6th Sooner Sports Notebook offered some tidbits on how spring ball is going for OU. However, with a few new articles today (notably this one from the Oklahoman), I decided to compile a list of the major points from the past few days:

Apparently DeMarco Murray's rehab from his injury is going quite well and he's been really hitting the weight room. If he can be healthy all season and back to his original form, the Sooners could be especially dangerous on offense.

The coaches are going to try to keep Ryan Broyles on the field as much as possible at one of the wide receiver positions. He may work more from the slot in 3 wide receiver formations, but otherwise expect him to be split out wide. Jameel Owens and DeJuan Miller are promising recruits, but right now the starters appear to be Ryan Broyles, Adron Tennell and Brandon Caleb.

In the notebook we talked about how Stephen Good was impressing. Apparently he was a power lifting champ in high school and is now the strongest player on the football team as only a sophomore.

Starting safeties are Quinton Carter and Sam Proctor. You may remember Quinton Carter from his vicious hits in the Big 12 Championship game, and you may remember Sam Proctor because it had seemed he won a starting job in spring ball last year, but faded down the stretch. New recruit Javon Harris is on the second string already, and 2nd year player Joseph Ibiloye is also on the second string. Apparently a walk on, Emmanuel Jones, is also surprinsing.

"Those kids hit. They’re not scared at all,” Franks said. "From the first time we started in full pads, they’re flying in, they’re knocking people’s helmets off, getting up and talking smack and it’s like they’re at home already and it’s good to see that.”

"It surprised me. You take into consideration that those kids should be back in high school getting fitted for a tux and getting ready for the prom, they’re out here going against kids that have already been in college and they’re out here playing like they’ve been here all year.” 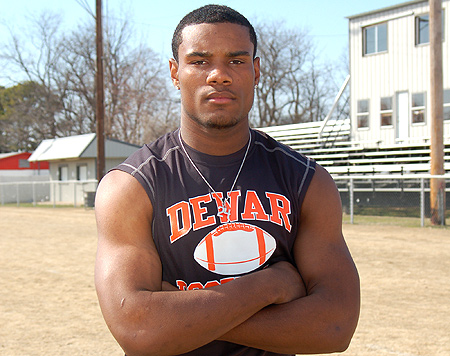 Ronnell Lewis is part of an exceptional defensive recruiting class, via Scout.com

Brian Lepak is also looking good on the offensive line. Trent Williams is one of the two seniors, but he wants to work on his leadership a little more.

Keenan Clayton might be sidelined the rest of the spring with a high ankle sprain.

Bob Stoops finally had some praise to sing about the football team and how they performed in a recent scrimmage:

"We got in 102, 103 plays. No one was hurt,” Stoops said. "The guys did a nice job. I was pleased. There was give and take. Both sides showed up and made good plays here and there.”