The women's basketball team is in St. Louis right now, preparing for their big game against Louisville tomorrow at about 6 PM. In a previous notebook, we provided a lot of preview links, so see that if you're interested.

We'll give you a little preview here with some quotes from their press conference today:

Whitney Hand thinks that Louisville will be tough and that they've gained a lot of momentum recently:

I think they've gained some momentum in the tournament and they're definitely on a roll and I think they're playing with some sense of urgency that we haven't seen really from them yet in this tournament.

Ashley jokes around about her sister, who wasn't at the presser. The question is what are you better at than Courtney?

Off the court, I'm better than her at pretty much everything (laughter), except for like being annoying and stuff that you don't want to be better at. On the court, I don't know, it's hard to say. I feel like I really complement her game and I think that comes with playing with her all my life.

Whitney Hand has a great response when asked to sum up their play this season:

I think our team really just we're as together as any team can be and I think that's really genuine, and I think that's something you don't see very often. It's not just surface we have to respect each other, like each other because we're forced to play with each other; it's a genuine want to be together friendship and love and family that kind of you can just see it resonate to the surface.

And I think that's what made our team special. You've seen very many times we'll have a struggle in the first half. We'll be down at halftime and I think we just show that by playing together and playing within each other to just battle our way back. I think when you're playing for each other it makes it a whole lot harder to beat than when you're just playing for yourselves.

The Voepel article linked above talks about this, but Sherri Coale mentions why she thinks Whitney Hand is the x factor:

I've said a number of times this season that when Whitney's making baskets from behind the arc we feel like we're invincible and we sort of play that way.

And when Whitney's hitting 3s and smiling and we're jumping around and hugging each other, it's pretty easy to get immersed in the moment and it allows you most often to put your best game forward.

Sherri Coale thinks that a certain Louisville player is the key:

But Angel McCoughtry obviously is their axis, and as she goes they go. But I think the people around her know how to play around her and with her and alongside of her. They don't stand and watch her play. That's the reason why they're here. They do a lot of things defensively which keeps you from scripting too much offensively. When you don't know what's coming, it's hard to be prepared for it.

I think we will see even more of Amanda. We kind of had to make a tough decision at the start of the NCAA tournament as to how much we used her, and I made the decision to only use her if I thought we had to have her early on, particularly in the first and second games.

And I think that it's paid off dramatically. She was feeling much better in the Oklahoma City regional and yet again I thought every day helps. And the training staff told us that: The longer you can rest her the more efficient she'll be when she returns.

And for the ladies in St. Louis: 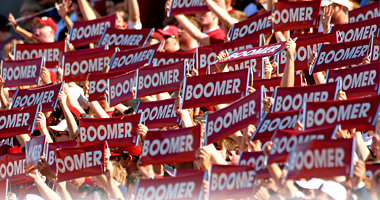