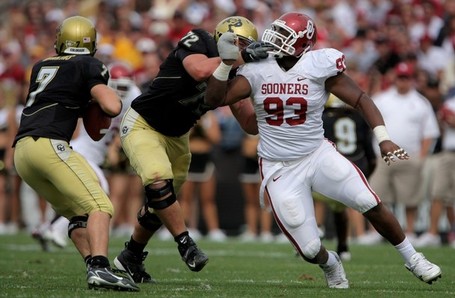 Gerald McCoy, in the process of getting "face-masked" above, will anchor a solid defensive line in 2009.

Part Two: Offensive Skill Position Players
Part One: Who Is and Isn't Back, Exciting New Players

Two opposite stories in the trenches for the Sooners this season. The offensive line lost 5 players, 4 of them starters. The only starter who is returning is OT Trent WIlliams. This isn't to say that OU didn't recruit solid offensive linemen, but they will need to mature as a unit and get some game experience before they would get anywhere close to as good as our offensive line was last year.

Meanwhile, the defensive line lost two rotation guys, and no regular starters. Additionally, there will be some added depth and DT Gerald McCoy is back despite having the potential to be a high NFL draft pick.

The good stuff after the jump...(click the link below)

Despite losing some great talent to the NFL or graduation, the Sooners are still looking stout on the offensive line. Anchoring the line will be senior Trent Williams who will move from his position of right tackle last year, to left tackle this year. He'll be charged with protecting Sam Bradford's blind side. Not bad to have a first team All Big 12-er protecting your blind side. Backing him up on the depth chart will probably be JUCO transfer Jeff Vinson who is absolutely huge (6'8" 350). Think Phil Loadholt. If Vinson doesn't latch onto the offense fast enough, expect Donald Stephenson to be available here as well. Stephenson saw the field in 7 games last year.

At the opposite tackle position, expect Cory Brandon to open up at the top of the depth chart. He played in nine games last year, recording 16 knockdown blocks - 5 each against Chattanooga and Washington. He was on the field for 148 plays. Backing him up, and possibly competing for the starting job will be LSU transfer Jarvis Jones who had to sit last year out. Also wouldn't be surprised to see Jeff Vinson getting some real playing time over on this side given that he's a huge body like Loadholt. Lack of experience in Division I and in the OU offense could keep him behind Brandon on the depth chart though.

The left guard position appears to be locked up by Brian Simmons, who the coaches consider a returning starter basically. He's a senior, knows the offense inside and out, and has had playing time the past couple of years. He led all reserve linemen last year with 50 knockdowns and 421 plays. He has played in all of OU's games the past two years, and even started twice in 2007. Behind him, expect either big bodied JUCO guard transfer Tavaris Jeffries, or perhaps CSU transfer Brian Lepak.

At the right guard, it looks like Stephen Good will have every opportunity to earn the starting job, as he has been impressive in spring practice so far. He was a highly touted recruit and he played in 7 games last year. Competing with Good will likely be Jeffries (the JUCO transfer), and Alex Williams. Williams played in 6 games last year.

And finally, at center, it looks like Ben Habern might have the edge. He got a medical redshirt last season after playing as the backup center for 3 games. He got injured against Baylor, but before the injury he had 9 knockdowns in 9 plays. Pretty impressive, but not surprising as all the recruiting services had him highly regarded. Behind him, probably Brian Lepak, or one of the backup guards perhaps. The two freshmen may not see the field much this year unless they really impress.

It's really up in the air right now. It's hard to project the offensive line. The final starting 5 will be determined not only by talent, but by the chemistry they have. If I had to call it right now with very little knowledge, I'd say from left to right: Trent Williams, Brian Simmons, Ben Habern, Stephen Good, Cory Brandon. In any event, the offensive line has the potential to actually be quite good.

This defensive line unit has a tremendous amount of talent and depth. All four starters from last year will be returning. On the edges look for Auston English and Jeremy Beal to continue starting. English burst onto the scene as a sophomore and last year was an All Big 12 Honorable Mention. He's got an unbelievable motor and nose for the ball. A similar player is Beal. He was an All Big 12 First Team by the AP. He led the team with 8.5 sacks and 15.5 tackles for loss.

Reserve defensive ends include Frank Alexander who was able to start and get significant playing time when Auston English has been banged up. He was an All Big 12 Honorable Mention and racked up 3.5 sacks on the year. Jonte Bumpus and Pryce Macon are depth guys, but will probably get passed for playing time by two extremely promising freshmen who redshirted last year. The first is R.J. Washington, who was the #1 DE recruit and #11 overall recruit on ESPN two years ago. He was an EA Sports and Parade All American. He holds his school record for sacks. He's an unbelievably talented and explosive player, and it will be hard to keep him off the field. The other guy who redshirted last year was David King, also a highly regarded recruit. He was named as the #11 defensive end nationally by Scout.com. Both King and Washington have the talent to get playing time this year.

At tackle, Gerald McCoy and Adrian Taylor should continue to start. McCoy is good enough to be playing NFL ball next year, but decided to come back for another season. He was an AP Second Team All American, and a Sporting News First Team All American. He led interior linemen on the team with 30 tackles and also was second on the team with 6.5 sacks. He plays well in the big game, getting 2 sacks against Texas' Colt McCoy and intercepting Tim Tebow. Adrian Taylor is pretty good himself. He tied for third on the team with 4.5 sacks. He had a career high 6 tackles in the National Championship Game.

Behind them there is some good depth. DeMarcus Granger had back surgery, so he's a bit of a question mark, but if he's healthy he has the talent of a starter on a Division I team. Cordero Moore is a senior, like Granger, and was part of the defensive tackle rotation last year. Casey Walker and Stacey McGee probably need to add a little weight before they'd be significant players in the the rotation. Both redshirted last year. But the guy who may jump up to the level of the first DT off the bench could be incoming freshman Jamarkus McFarland. He is a 5 star recruit on Scout.com. He has the size, quickness and strength to compete immediately. He needs to get better at getting a push up the middle to get to the quarterback.

Overall, the defensive line is about 2 starting quality players deep at every position, with all of the current starters being exceptional players. The defensive line could be one of the top units on the team this upcoming season. They say that interceptions and stops on defense come from great pressure. All of the starting defensive lineman can certainly pressure the ball, and with a defensive line to anchor the defense, I think we will be much improved from a year ago.