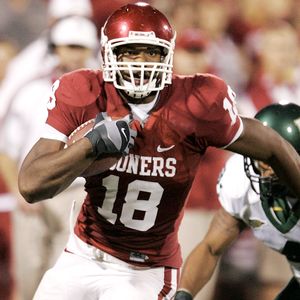 First it was Jermaine Gresham getting a citation by one of ’s finest for not wearing a seatbelt, then a crack squad of the department’s super heroes earned accommodations for stopping Donald Stephenson’s excessive speeding spree, all before Inspector Gadget’s undercover investigation revealed that linebacker Keenan Clayton had been driving around without his insurance verification in the car.

No longer satisfied with busting crack houses and meth labs, cracking down on drunk drivers or looking for the latest missing person the Norman Police Department has set its sites on the OU football team. The ironic thing is that these are the same guys you’ll find cheering Jermaine Gresham on in his pursuit of violent collisions with NFL bound defenders, begging Donald Stephenson to move faster along the defensive line and encouraging Keenan Clayton to play with reckless abandon.

Despite being the hometown heroes a message is being sent loud and clear to ’s football team. That message is simple but plain, obey the law and pay your fines. As to who is sending out the message it has yet to be made clear but I refuse to believe that this is all coincidence. Perhaps revenue is down and desperate times are calling for desperate measures and they are going after everyone who owes the city anything, or perhaps the Chief or Police is seeking retribution for money lost betting on BCS bowl games. Whatever the case I would almost guarantee that if there are any other players with outstanding traffic violations they will be taken care of in a matter of days.

Let’s face it, football players have been in trouble for a lot worse than failing to wear a seatbelt in past years. Possibly the message being sent to ’s football team is that they aren’t invincible. Driving irresponsibly and disobeying traffic laws is a quick way to discover just how frail you are. These Sooners are possibly too young to remember Michael Thompson and the effect his car wreck had. A starter on the 2000 national championship Thompson nearly lost his life when his pickup swerved off the road and slammed into a tree. He recovered from his injuries but a once promising football career was lost because Thompson never returned to his championship form.

This team is most certainly familiar with Corey Wilson who was paralyzed just two months ago in a car accident on I-35. I don’t believe that the timing of these warrants (at the end of spring practice, after ’s release from the hospital) is coincidence either. Sometimes tough love is necessary to keep the ones you care for focused one what is truly best for them. If it takes a few names in the paper and some warrants being processed to keep ’s athletes safety conscious then it is certainly worth the sacrifice. A sacrifice that Bob Stoops and the rest of the Sooner Nation would be more than willing to make.