This is the latest edition of the spring football preview editions, but this one will be the first in a series of special interest stories.

Ask a Sooner fan which team they hate the most, and more likely than not the answer will be, "Texas". The opposite answer would be true for most Longhorn fans. The hate in this rivalry has been brewing since 1900, but of course history and hate do not alone make the Red River Rivalry the best rivalry in college football right now.

How about the significance?

Since 1945, yes 1945, one or both of the teams has been ranked in the top 25 coming into 60 of the 65 games. Five of the last nine years, either Oklahoma or Texas has competed in the BCS National Championship Game, with Oklahoma winning the title in 2000 and Texas winning in 2005.

The fact of the matter is, Oklahoma and Texas both consistently compete at an elite level in college football, and begin every season with aspirations at a national title. Often, the result of this singular game at the historic Cotton Bowl in Dallas, Texas crushes one team's dreams, while propelling another to greatness. The game almost always has an impact on the college football rankings.

OU coaches and OU players alike are judged by their ability to beat Texas. It is the one game that everyone marks on their calendar years in advance. It's always the biggest regular season game of the year for each team, and it nearly always has national implications. For this one week, the nation's eye is on Dallas.

No other rivalries can boast that kind of national significance, at least in the past decade, or so, on the national scale. Prior to the 2000s, this may have been different, but it is hard to argue that any other rivalry game has had more significance lately. Notre Dame has slumped making the ND-USC game less impactful. Michigan has also slumped, and Jim Tressel has owned the Wolverines, diminishing the significance of that game recently. Auburn and Alabama can not seem to both get to the top of the rankings at the same time. Florida has been superb recently, but Georgia has seemed to be mired in the middle of the top 25 for awhile. And let's face it, Army and Navy have a ways to go before they would even be considered for a BCS game.

So far, in the 2000s, more has been on the line in the Red River Rivalry, on average, than in any other rivalry game. Follow the link to read the rest...

"OU-Texas Weekend" begins as early as Thursday, and carries over on Friday when Texas fans drive north on I-35 into Dallas, and Sooner fans drive south on I-35 to Dallas as well. The schools have unofficial "holidays" on the prior Friday, although everyone knows that it's merely because nobody would show up to class that day. People will put flags on their car windows, paint up their cars, and honk their horns at other fans all through the drive to Dallas. 'Horns fans will be giving each other (and Sooner fans for that matter) their "horns up" gesture (barf). Sooner fans, meanwhile, will likely make some sort of Sooner gesture, or simply throw their horns down. There simply is nothing quite like trash talking complete strangers through car windows, while hurtling at 75 miles per hour towards the Cotton Bowl.

Everywhere you look, it seems that everything is adorned in either crimson or burnt orange (barf again) between Austin and Norman with the orangier shades further south, but a good mix around the Dallas area. Local businesses will put up messages of support for a team, or welcome to any and all fans.

Then comes the "West End" on Friday Night. Thousands of Sooner and 'Horn fans converge on Dallas area establishments, but particularly on the "West End" of Dallas. The West End is just a historic district full of restaurants, clubs, bars, lodging and other attractions. Select streets are blocked off and it becomes a giant party - a giant hate-filled party. The best way to describe it is "roving bands of Sooner and 'Horn fans taunting each other". This is where everyone gets fired up for the game, which of course, they already are but this gets everyone really fired up. Yes, there are occasionally arrests when people get too out of hand, but most people are there to insult and jeer at the other fan base. I personally, have never seen people yell so much at other people, but it's all in good fun.

The next day, people fight their hangovers or lack of sleep by heading over to the Texas State Fair, which surrounds the Cotton Bowl. The Texas State Fair offers plenty of attractions and food, all of it seemingly fried, and offers a great setting for the pre and post game environment. The bands march through the fairgrounds to get to the game and fans cheer as the team busses arrive. But the real show comes when the fans filter into the Cotton Bowl. 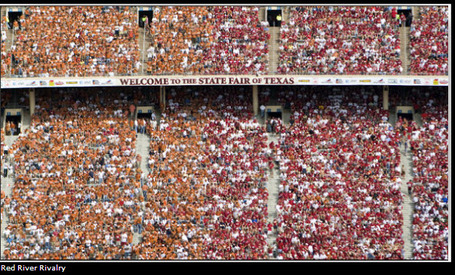 Oklahoma and Texas fans are divided at the 50 yard line. One half of the stadium wears crimson, the other looks ugly (sorry, an old joke). Both of the bands play prior to the game, doing their typical pre-game show. OU fans scream "Boomer Sooner" back and forth, and Texas fans scream "Texas Fight", to which the Sooner fans attempt to drown out the "Fight" with "Sucks". The two fan bases exchange cheers and chants back and forth all game long. Both schools hope to be hearing their fight song being played more.

The game itself is always intense and physical. Neither school wants to lose the game. It is usually filled with big and memorable plays, some that will be forever etched in the memory of many college football fans. One such play was documented in our video series.

And the contest is usually pretty even and entertaining. Over the series, the average score is 16 to 16.

And the players that compete in the Red River Rivalry are second to none. Of course everyone knows about Sam Bradford and Colt McCoy. How about Adrian Peterson, Quentin Griffin, Mark Clayton, Keith Jackson, Billy Sims, Jason White, Tom Brahaney, Bill Krisher, Roy Williams, Lee Roy Selmon, Teddy Lehman, Brian Bosworth, and Joe Washington for OU? And how about Ricky Williams, Earl Campbell, Vince Young, Bryant Westbrook, and many others for Texas?

Not to mention, the likes of Bob Stoops, Barry Switzer, Mack Brown and Darrell Royal prowling the sidelines.

The Red River Rivalry game has everything that a good rivalry game should have: over 100 years of history, historically close and entertaining matchups, talented players, great coaches, national implications, huge and active fan bases, respectful hate, and tradition.

There are many more facets of the rivalry which will go undiscussed here (since I don't have the time), such as recruiting, but suffice it to say that the Red River Rivalry is a big deal.

But is it the best rivalry in college football right now? I'll leave that up to you. Feel free to debate it in the comments section!