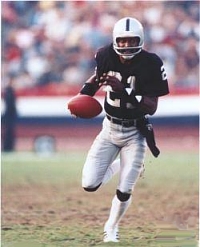 The Colorado Buffaloes currently have 21 players in the NFL scattered among 15 different teams. Included among them are Pittsburgh punter Mitch Berger, Houston running back Chris Brown, Green Bay kicker Mason Crosby and Denver Broncos tight end Daniel Graham, but what about the greatest Colorado player to play in the NFL? The Buffs have produced 14 pro bowlers but none greater than Cliff Branch.

Branch played wide receiver for the Oakland/LA Raiders for 14 seasons. He helped the Raiders win three World Championships (Super Bowls XI, XV, XVIII). In his three Super Bowls Branch caught a combined 14 passes for 176 yards and 3 touchdowns. Branch was named to 4 consecutive Pro Bowls (1974-1977). In 1974, he led the NFL in both receiving yards (1,092) and receiving touchdowns (13).

Cliff Branch finished his career with 501 receptions for 8,685 and 67 touchdowns earning him our title as the greatest NFL player to come out of the . How do you feel, agree or disagree?