The Biggest Bear Of All?

Share All sharing options for: The Biggest Bear Of All? 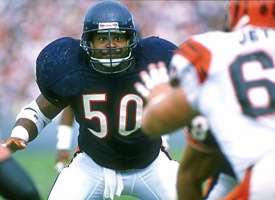 With very little more than baseball to keep us busy and the fun football facts features coming once per week let’s take a stroll through the conference looking at some of the current players in the NFL and who could possibly be the greatest NFL player from that school. We’ll start with the Baylor Bears.

In 12 NFL seasons Mike Singletary started 172 games and was named as an All-Pro eight times. He recorded 1,488 career tackles, 19 sacks and 7 interceptions. He was the defensive anchor for the 1985 World Championship team that destroyed 46-10 in the Super Bowl.

Singletary was drafted in the second round (38th overall pick) by the Bears in the 1981 draft. He was named to the All Decade Team for the 1980’s and elected into the Pro Football Hall of Fame in 1998. He’ll always be immortalized by his intense stare down of opposing offenses.

So, what do you think? Is Mike Singletary the greatest NFL player to come out of Baylor?