Share All sharing options for: Fun Football Facts From 2008: Chattanooga 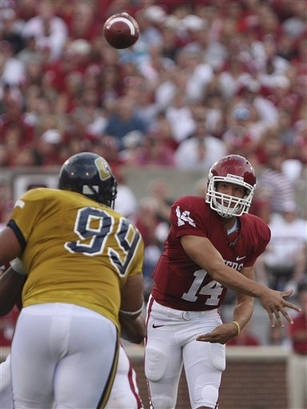 Sam Bradford Completed 77% of his passes against the Mocs with 2 scores.

With the men's basketball season over and the women having a max of two games left its time to start rehashing the 2008 football season with baseball also taking center stage as a current active sport.

Oklahoma started the 2008 football season against Chattanooga. The Mocs were Oklahoma's first Championship Subdivision opponent since Bob Stoops made is debut against Indiana State in 1999. Here are a few fun facts that you may have forgotten about this game.