Share All sharing options for: McDonald's All American Game Review 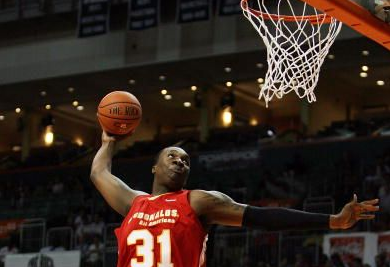 Tiny Gallon showing off for the fans.

Yes, that is a picture of OU recruit Tiny Gallon doing his best impression of Blake Griffin with the hammer jam. Unfortunately, I don't think he can fly as high as Blake, but he got off a couple impressive dunks during the game. In fact, he led all scorers in the game. OU had another recruit in the game - Tommy Mason-Griffin. Here are their stat-lines:

For the full boxscore, click here. First, we'll discuss Tiny. He had an extremely impressive statline especially when you consider he only played 21 minutes. He led all scorers and took down 7 boards but still didn't get game MVP. He shot the ball extremely well. Most of his shots were from within 10 feet, but he did show off some range and even nailed down a trey. He was also perfect from the line, something I'm sure OU fans are happy about from a big. Tiny got up and down the floor pretty well in the first half but in the second half fatigue was obvious. A lot of times he was on the court but you didn't see him in the picture. If there was a fast break in either direction he either took a long time to get to the other end of the court, or stayed on the other end. He also got most of his boards in the 1st half as he spent most of the second half on the perimeter. He didn't battle much for rebounds. Overall, you can tell that when he has the energy, he will be dominant in the low post. He just needs to work on his conditioning. Overall, I had a positive impression of him.

Tommy Mason-Griffin didn't shoot well from the floor. However, he was the leading assist man on the West. The East had more assists than the West team, and that seemed to be because the West's offense had a bit more isolation and guys creating off the dribble. He seemed like the prototypical point guard - about 5'11", solidly built and a good passer. He got into trouble, and the turnovers happened, when he penetrated too far into the lane and got stuck with the option of having to shoot over a much taller guy, or having to pass to a well defended teammate. I think he's probably used to getting away with this, but against longer and more talented guys, he got into a bit of trouble. Nevertheless, despite his statline, you can tell that he's talented, has good conditioning, and has a natural feel for running the point. He seems to have a natural shot, especially from deep, but he just couldn't get it to fall. Either way, I would suspect that his first year here he will be distributing more than shooting. If I could pick an area for him to improve (I said for Tiny it was conditioning), I would say that he should get a better arsenal for when he penetrates. With a more diverse array of options (dish it out, fadeaway shot, teardrop/runner, layup, reverse layup, drawing the foul, backing it out again) I think he could be real dangerous and it will be easier for him to break down defenses.

All in all, these two guys look like they'll be big contributers their first year on campus. How many minutes they get will be determined by how much work they put in between now and then. Bottom line: proud to be able to call these guys Sooners!