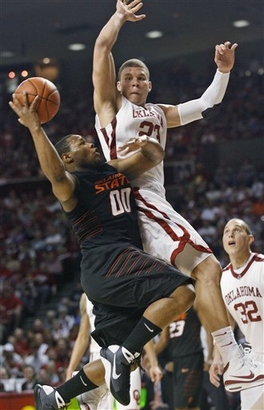 Oklahoma made it a Bedlam sweep Saturday afternoon with a 82-78 victory over Oklahoma State at Lloyd Noble. The Sooners were still sloppy in the way they played but regained the effort and intensity that they were missing Wednesday night at Missouri. Texas A&M did OU a favor earlier in the day by knocking off the Tigers which means now the Sooners have the #2 seed locked up in the conference tournament next week in Oklahoma City.

In the game that most likely closed out his career at Oklahoma, Blake Griffin scored 33 points and grabbed 13 rebounds. Oklahoma has now won five consecutive games against the Cowboys and seven of the last eight.

More thoughts on the game to come later!