Share All sharing options for: Class Is In Session: First Bracketology Lesson 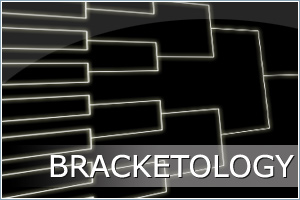 Is having a #1 seed really that much better than having a #2 seed?

It is certainly an interesting question. To answer the question we need to take a look at a bunch of statistics. A 1-seed, on average, wins 3.32 games per tournament. A 2-seed wins 2.41 games per tournament, for an improvement of about 1 game per tourney for the 1-seeds.

Furthermore, 7, 8, 9, and 10 seeds all tend to be bigger name schools that have underachieved. You don't see a mid-major there as often as you see a team from one of the Big 6 conferences that had an OK season. Does the tourney selection committee really throw 2-seeds that much tougher of a matchup with a 7 seed?

In my opinion, the performance of the 2-seeds has more to do with the team itself than the seed in front of its name. Sure the 1-seeds get protected by location a bit more (playing closer to home). In one recent tournament, North Carolina played most of it's tourney run in the state of North Carolina.

The point is, if you're a 1-seed, you probably wowed the selection committee in some way that you are one of the 4 most dominant teams in the land. That is why 1-seeds are more solid, and win 1 more game on average per tournament. It is because they rarely falter. If you are a 2-seed, you probably have some blemish on your resume that makes the committee think you're a little more vulnerable. So it would make sense that the 2-seeds are more upset prone in general, and it's not because they have to play tougher competition early in the tournament.

Of course, another interesting stat for you to chew on: from 2003-2007, 6 and 7 seeds went 31-17 against the spread, indicating that perhaps they were a bit undervalued. Perhaps that's why 2-seeds have had trouble lately (one can certainly remember Davidson toppling Georgetown and West Virginia taking down Duke last year).

So take heart Sooner fans, whether it's a 1 or a 2 seed, this team controls it's own destiny. Don't believe any of that seeding voo-doo.