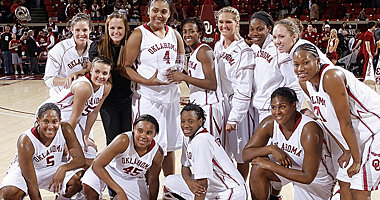 A big congratulations to our women's basketball team for winning a Big 12 regular season title again. Sherri Coale has been absolutely fantastic as our coach while she's been here, and consistently recruits top talent. As opposed to any of the past few years, this team seems to have the right blend of experience and youth, size and athleticism, etc. Perhaps, that's what prompted Courtney Paris to utter the following words:

"We’re gonna win a national championship," she told the crowd.

"If we don’t, which is not even an option," Paris said after the applause died down, "just to put something on the line — and it might take me the rest of my life — I will pay back my scholarship because I didn’t do what I said I was going to do." --Jenny Carlson, The Oklahoman

Very bold words from the OU senior. Guaranteeing a championship is one thing when you are in the actual championship game. It's quite another when it's about a month away and you have no idea whether or not you'll be in the game.

More notes about the women's basketball team after the jump (click link below).

But of course this is all much more fun to discuss than our men's basketball team who has been on a slide recently. And the thing is, while Courtney's promise may seem exceptionally bold (especially with an undefeated UConn team lurking), the thing is that this team is really really good.

Have you seen them play live?

Courtney Paris is an incredible player. Her size and athleticism allowed her to put up a remarkable 112 straight double doubles, shattering any previous NCAA record. Her sister Ashley Paris has more range, athleticism, and moves, and she battles for rebounds just as hard as her sister. Danielle Robinson is a shifty point guard who can make people miss, juke defenders out of their shoes, and put a pass right where it needs to go. Amanda Thompson hails from Chicago, and she does a lot of things. She has a nice jump shot, can hit a fadeaway, and she can battle down low for rebounds. OU's Whitney Hand has had a great freshman season. While she's injured right now, she should be back for the tournament. And then there's a lot of depth. Nyeshia Stevenson, Carlee Roethlisberger (yes, Big Ben's sister), Jasmine Hartman, and Jenny Vining add great depth.

So perhaps Courtney isn't that crazy. In any event, it should be fun to watch them in the tournament. Keep an eye on them. A lot of people just forget how good our women's basketball team is. And if there's anyone in the NCAA ranks who deserves a national championship, it's Courtney Paris, who has been simply remarkable.