Share All sharing options for: Meet Me In St. Louis: Final Four 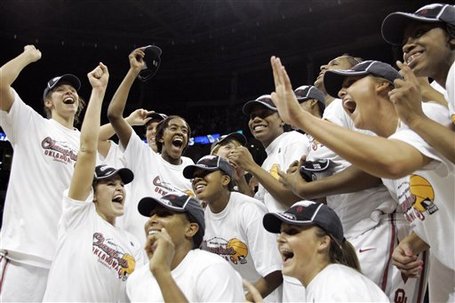 The OU women's basketball team advanced to the Final Four in St. Louis with a 74-68 victory tonight over 6 seed Purdue. They outscored Purdue by 11 in the second half to overcome a 5-point halftime deficit. This was only the second time the OU women's team has ever advanced to the Elite Eight despite lots of recent success in the past decade. The last time they went to the Elite Eight they lost the championship game in 2002. They will meet Louisville in the Final Four in St. Louis now, and play the winner of unbeaten Connecticut and Stanford IF they win.