It's time for another Sooner Sports Notebook, and I decided to debut a sleeker, nicer looking header than the old, grainy one I was using.

Before anything else, let's congratulate our women's basketball team on reaching the Elite Eight by soundly defeating Pittsburgh (the 4-seed in their region). This is only the second time our women's team has ever reached the Elite Eight. The other time? OU was a 1-seed (just like this year) and they went on to lose the national championship game that year. Here is their Regional Final matchup:

Even if you're not a women's basketball fan, you really should watch the game. This team looks special, they are clicking on all cylinders, and haven't been challenged in the tournament, despite playing some solid teams. At the center of it all, freshman Whitney Hand who has found her shot again after recovering from a hand injury (no pun intended). Amanda Thompson describes how Whitney has been playing:

“She was unconscious. She was just doing her thing,” team captain Amanda Thompson said. “I think those offensive rebounds really got her going early.”

Good stuff. If they make the Final Four, I'll start doing game previews like I did for the men's tournament (although these will probably not be as detailed).

Speaking of wanting greater fan participation in our women's basketball games, the team agrees! They want you at the Ford Center. At least tune into ESPN.

We'll jump to men's basketball, after the jump (click the link below)...

There's lots of good stuff related to the men's basketball team today. Let's start off with an award! Blake Griffin took home the Oscar Robertson Trophy - awarded to the nation's best basketball player and given out by the U.S. Basketball Writers Association.

Speaking of Blake Griffin, he was also a unanimous AP All American. No surprise there, and the sky is the limit for the number of awards and honors Blake could take home this offseason.

Looking towards the future, there is also plenty of promising news. The rumor mills have started on the message boards with John Calipari likely to take a huge deal with Kentucky. A Sea of Blue (SBNation UK Blog) is trying to keep up with the latest. Of course, with a coaching change always comes the rumors of decommitments and transfers. The hottest rumor is that Daniel Orton will decommit from Kentucky and be out on the open market. For those of you unacquainted with Orton, he is a 5-star center who was recruited heavily by OU and Kansas. If he decommits, he would likely consider one of those two schools and OU has a scholarship open. The latest word though is that Orton is staying put, so don't get your hopes up. 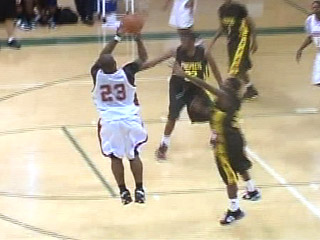 Tommy Mason-Griffin can hit the deep shot, something I'm sure you all were wanting during the UNC game.

Meanwhile, the McDonald's All Americans are in Miami, FL for their game on Wednesday. The skills competition was today and OU PG recruit Tommy Mason-Griffin was in the finals of the three point shooting competition. He lost by one shot to some guy who's going to Duke. Look for this guy to have a great chance to start at the point as a freshman.

Also in Miami is OU's other McDonald's All-American - Keith "Tiny" Gallon. According to all accounts, Tiny has been the dominant post player in Miami so far, something I'm sure that will make Sooner fans happy if when Blake bolts to the NBA. Here are some snippits from Rivals about our two recruits' performances so far:

"Gallon, who insists on being called Tiny, has his game on another level since working and dieting himself into shape. Looking almost 100-pounds lighter than this summer, Gallon ran the floor as well as any big man on the West team, and had his way with the much skinnier John Henson in the post."

"Once again Keith Gallon had a strong day. John Henson fared much better against him on Monday than he did Sunday, using his length and quick hands to counter Tiny's power. But when Renardo Sidney matched up on Gallon, the Oklahoma signee had a hey day scoring in transition as Sidney seemed content to stand on the offensive wing."

"Gallon isn't the only talented future Sooner in the McDonald's Game. Tommy Mason-Griffin had a stretch in practice when he was on fire, creating space off the dribble at will and draining jumpers. Making his scoring flurry even more impressive was that he was being guarded by arguably the best perimeter defender in the class Avery Bradley."

The good news is that Mason-Griffin and Gallon are working together on one of the west squads, so hopefully they are getting comfortable together.

Finally, the second edition of the football spring preview is up!