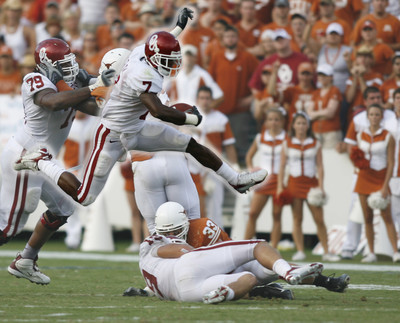 Can DeMarco Murray have an injury free season? Image via media.lvrj.com

Part One: Who Is and Isn't Back, Exciting New Players

Of the 6 skill position starters - QB, RB, FB, FL, SE, TE - 4 will be returning for the 2009 football season. Those starters include QB Sam Bradford, RB DeMarco Murray and/or Chris Brown, FB Matt Clapp, and TE Jermaine Gresham. Both Bradford and Gresham could have bolted to the NFL and likely been 1st round draft choices, but instead elected to return to OU. In any case, all of these skill position players will need to step it up to help keep the offense humming like it was last year - breaking the NCAA scoring record and averaging ridiculous scoring.

Piloting the Sooners for his 3rd season will be reigning Heisman Trophy winner and OU Junior Sam Bradford. Sam has exceeded all expectations and become one of the best quarterbacks to play in the crimson and cream. I say this because he has put up monsterous numbers in comparison to his predecessors, but still has yet to win that always elusive national title.

How good was Sam's 2008 Heisman Trophy campaign? He ranked 1st nationally in passing efficiency, touchdowns thrown, and yards per completion. He broke the OU record for passing yards in a single game with 468 against Kansas. He broke OU records for passing touchdowns in a single season and in a career, both previously held by Jason White. He's thrown 84 touchdown passes as a freshman and sophomore combined, which shattered the previous NCAA record of 55 by Rex Grossman of Florida. His career numbers are 539/783 for 7585 yards, 84 TDs, 14 INT, and a passer efficiency of 182.04.

Of course we all know what Sam brings to the table, but who will provide depth at the QB position? Nobody with any game experience, but the depth chart behind Sam probably shakes out something like this (scholarship players only):

There has been a bit of buzz around Jones in spring ball, and the word is that he's been playing pretty well. That shouldn't be a surprise, because when OU recruited him he was rated the #1 player in New Mexico and the #6 QB overall by Rivals, and the #3 QB overall by ESPN. He redshirted last season. Watching him in warmups, he can put quite a bit of zip on the ball and is fairly accurate too. He is an unknown quantity in game situations, so his performance in the spring game should be interesting.

Drew Allen is already 6'6" and 210 lbs coming out of high school. He will probably redshirt this season, but with a year in the Oklahoma weights program he could be a big, strong-armed quarterback that also will have the potential to do great things in Norman. He doesn't have the recruiting service accolades that Jones did coming out of high school, but his statistics in high school were outstanding playing in Texas. He can also apparently run pretty well, with a 4.70 time in the 40.

Running backs, wide receivers and tight ends after the jump (click the link)...

Returning for the Sooners in the backfield will be the 1-2 punch of Chris Brown and DeMarco Murray. Both of these running backs were 1000 yard rushers last year. Chris Brown is the "between-the-tackles", workmanlike runner that seems to always be able to fall forward for 3 or 4 yards if there's no running lanes. He is deceptively fast though and has the speed and agility to make people miss and gain big yards once he gets through the first couple levels of defenders.

DeMarco Murray is considered the flashier back who is a threat to take it the distance every time the ball touches his hands. Murray seems at his best outside the tackles, or hitting a lane between a guard and a tackle. In those areas of the field, he can turn on the jets and get around the corner a bit easier than anyone else on OU's roster. Murray is especially dangerous catching the ball out of the backfield on screens or flares. Both Murray and Brown have great hands.

Chris Brown has been durable, but DeMarco has had his fair share of injuries. The biggest question will be whether or not DeMarco can stay healthy this season. If so, I would expect a breakout year that many people have been waiting for. He has the size, speed and agility to be one of the top rushers inthe nation.

With Brown and Murray being so talented and reliable, it's going to be difficult to see any time behind them at the RB position. Mossis Madu proved he can run the ball in the Big 12 Championship game, but he's likely going to be moved to a slot receiver position this season. Otherwise, OU merely has two 5-star recruits from the 2008 class in Justin Johnson and Jermie Calhoun. These two were widely regarded as being the top two RB recruits nationally. Johnson got some playing time in mop-up scenarios last year and he did not redshirt so he will be returning as a sophmore. Calhoun did redshirt. Both have been doing well in spring ball according to all accounts, especially Calhoun. Don't be surprised to see Brown and Murray gone after this season (especially if Murray can stay healthy), but the future looks bright. Given that we have Brown and Murray though, don't expect either to get many carries this season, barring injuries.

The Sooners graduated 3 senior wideouts - Manny Johnson, Juaquin Iglesias, and Quentin Chaney - and will now be looking for people to step up and start at wide receiver. Two guys are almost locks for starters, unless one of the other guys really shows up and impresses in spring ball. The first is sophomore Ryan Broyles who set the record for most yards by a freshman WR and tied the record for most catches. He operated in the slot and may not have the size to move to flanker or split end. One of the wide positions should go to senior Adron Tennell. Tennell has played mostly in garbage time, but he has the size and experience to immediately make an impact, and probably has quite a few reps with Bradford.

Broyles should definitely start. I would be 90% sure Tennell will as well. However, Tennell will be challenged by a lot of younger talent. Juniors Mossis Madu and Brandon Caleb probably stand the best chance of being the third starter. Madu is an experiment, shifting from RB. If that doesn't work he'll be the third string running back again. Mossis Madu is shifty and has deceptive speed. Caleb has a little better size and is used to the wide receiver position.

Cameron Kenney is an intriuging JUCO transfer from a community college in Georgia. I think he has the talent to make an impact immediately, even if it's off the bench. Then Owens and Miller got some reps off the bench last year as freshman in garbage time. They both have excellent size which could help them get some playing time over a few of the smaller receivers. They will be sophomores but should have some good experience and a repertoire with Bradford. Jaz Reynolds would really need to impress to see the field. More than likely he'll redshirt and make an impact next year.

Basically, beyond Broyles and Tennell there is a lot of young talent. 6 guys will challenge for maybe 2 or 3 spots that will see serious playing time. I think the spring ball competition will allow the cream to rise to the top, and give the others valuable experience for a year or two down the road. I honestly can't give a great preview because I haven't heard all that much about how the competition is going and a lot of the guys are unknown quantities.

For the tight end position, everyone returns. Additionally we add top TE recruit Gabe Ikard who will probably redshirt since Gresham and Eldridge will be leaving next year. Jermaine Gresham is the offensive threat of the two seniors. Todd McShay of ESPN analyzed the Oklahoma offense once and said that Jermaine Gresham creates huge matchup problems. He's one of three guys that I think can do this for us: Murray, Madu and Gresham. This is because Gresham can line up on the line or in the slot and be about as equally effective. Murray and Madu are dangerous in the slot too. Eldridge is more of a blocker and role player, but also has good hands. Both have NFL size, but Gresham gets more attention because of his offensive talent and ability to line up in the slot.

If you can offer any insight into any position battles, feel free to post below.