Share All sharing options for: Previewing the Elite Eight Showdown: #1 UNC vs. #2 Oklahoma 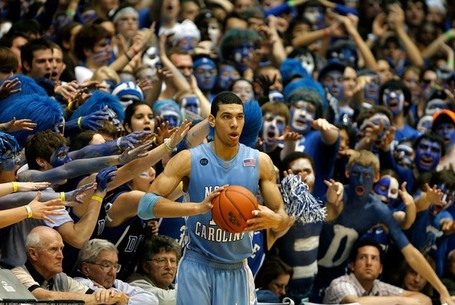 Unflappable [uhn-flap-uh-buhl] (adj.) - not easily upset or confused, especially in a crisis.

Despite all the chaos surrounding the Oklahoma Sooners in their final weeks of the season, they have done nothing but impress in the NCAA Tournament so far. They have built solid leads in all of the games so far, and won each by double digit margins. More importantly, they appear to be clicking at the right time. Team chemistry seems stronger than ever and the guys seem to have a will to win. Their passes are crisper, their rebounding stronger, and their celebrations more emotional. Nobody who watched the last two weeks of the season would have predicted that the Sooners would navigate the tournament field this easily into the Elite Eight. And that is why they are unflappable - cool customers just like their coach, Jeff Capel.

Unfortunately though, Jeff Capel will be leading the Sooners up against his former rival, the North Carolina Tar Heels, who have performed similiarly in the NCAA tournament so far. In fact, most would argue that they have been more dominant. If you listen to most of the mainstream media talking heads, and even the fans, Oklahoma doesn't stand a chance.

The question is which team that's been steamrolling competition in the tournament, and doesn't get flustered under pressure, will punch their ticket to Detroit? An in-depth numbers breakdown will follow after the jump (click the link below).

This section will offer a brief look at how the teams compare in various statistical categories and rankings. I'll provide the national ranking for each team for each category.

Both teams are offensive powerhouses. It's really pretty amazing when you consider the above statistics. These are both some of the most efficient offensive teams in the country. They are efficient for different reasons. Oklahoma is efficient on offense when they play the inside-outside game and drive to the rim. That creates more opportunities for them. Also, the Sooners are obviously more efficient when they get the ball to Blake Griffin. North Carolina is efficient when they can run the fastbreak. The Sooners are at their best when they run their offense through Blake Griffin just like North Carolina is at their best when they run their offense through Ty Lawson. He is ranked by KenPom.com as the most efficient offensive player in the country.

You can see the difference in styles in the possessions per game statistic which is a good proxy for the pace the team usually plays at. North Carolina typically plays the 7th fastest game in the country, while OU plays more of an average tempo - a mix between a few fast breaks, but mostly half court.

The bad news for both teams is that only one team has won the title in the past 5 years ranked outside of the top 5 in defensive efficiency. That team (Florida in 2007) was ranked just 12th, and was also the most efficient offensive team that particular year. Perhaps the old mantra "defense wins championships" is true. If it is, then Connecticut (3) and Louisville (2) have reason to be extremely hopeful, and Michigan State (10) and Missouri (11) should be happy with their chances too. Amazingly, all those "defensive" teams are on the same side of the bracket. Both UNC and OU are ranked outside the top 20. The winner of this game could be decided by which defense decides to step up.

Not surprisingly for a team that is demolishing most people, UNC has a lot of experience. They start 2 seniors and 3 juniors. Two of the juniors (Ellington and Lawson) could probably go to the NBA and get drafted. Not only that, but all of these guys have a significant amount of NCAA tournament experience with some deep runs into March.

It all starts with Ty Lawson. The shifty, speedy 5'11" guard can score and create. Jeff Capel would call him a "playmaker". He is the second leading scorer on the team and dishes out about 7 assists per game. The offense runs through him. He'll look to set up his teammates first but he'll shoot the ball too. Don't leave him open beyond the arc because he basically makes about 1 out of every 2 shots he takes from 3-point land. According to KenPom.com he is the most efficient offensive player in the nation and has the 10th best true shooting percentage nationally (accounting for free throws and 3 pointers). Playing good on ball defense with Lawson will be very key. Whoever draws Lawson needs to bring their A-game. 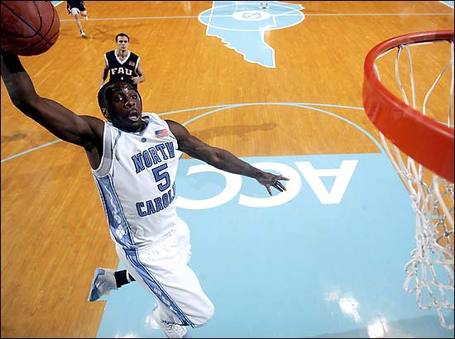 Ty Lawson does it all for the Tar Heels

Their second offensive force is Tyler Hansbrough, the reigning national player of the year (Naismith winner). He is the 20th most efficient offensive player in the country, probably because he is 3rd best nationally at drawing fouls and getting to the line. He draws about 8 fouls per game and once he gets to the line, he nails free throws at a 85.6% clip. This will obviously be Blake Griffin's defensive assignment if they play some flavor of man defense. I honestly think that this matchup of two of the greatest players in college basketball today will be allowed to happen without two many whistles. Both players are very physical and I think the refs are going to let them play unless a foul is really obvious. Blake has stepped it up in the tournament and neutralizing Hansbrough will be key, as you can't let Lawson AND Hansbrough hit their groove.

Beyond that, Deon Thompson is another big post presence (kind of reminds me of Syracuse's starting bigs). Wayne Ellington and Danny Green are two versatile wing players who are long and athletic enough to play defense, alter shots, and even get a block or two. They both can nail the three and shoot at a high percentage. Warren and Crocker will probably draw these two respectively. One will probably need to break even and another will probably need to win their matchup in order for OU to have a chance. The Sooners will have to worry enough about Lawson and Hansbrough - they can't afford to have Green or Ellington go off. I compare it to our game against Syracuse. They knew Warren and Blake were dangerous, but they couldn't afford to have a guy like Crocker play great. I'd say that neutralizing Ellington and Green is a big key for us.

North Carolina, like Oklahoma and Syracuse for that matter, does not have an exceptionally deep rotation. They only get about 28% bench minutes per game, which is only 235th in the country. Ed Davis and Bobby Frasor are the only two guys that really are a significant part of the rotation off the bench. Bobby Frasor does not take many shots and you can tell why - he shoots only 44.4% from inside the arc and only about 25% from outside the arc. He averages about 3 shots per game and about 2 out of every 3 shots is a 3-pointer, which is surprising given he only makes about 1 out of every 4 threes. Ed Davis is more dangerous as a bench big. He has the size and talent to outmuscle Ryan Wright on the low block, the size to shoot and rebound over Juan Pattillo. We might see with Jeff Capel bring Orlando Allen off the bench to go at Davis. Unfortunately, when Blake gets his rest, I think that Davis could get some productive minutes down low.

Keys To The Game