Share All sharing options for: Initial Thoughts On The UNC Tar Heels 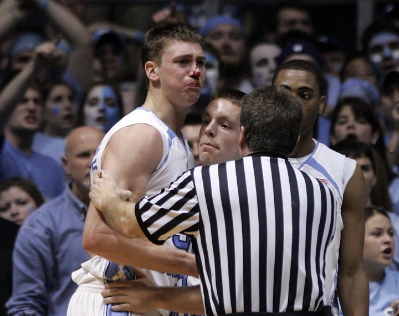 A Full Preview is now available!

They are going to be tough to beat. Sorry, I know that I should throw all the stats out there and spin it in an optimistic way, but in all honesty the UNC Tar Heels are a great basketball team. And they are running like a well oiled machine right now. Such teams are usually tough to stop.

People will start arguing that OU is playing their best basketball right now. I would actually agree, I think that the game against Syracuse was our most complete game and the best we've played against a real quality opponent. We seem to be in sync. But let's not forget that Syracuse absolutely did not play up to their potential. Want proof? The Orange shot a dismal 6% outside the lane in the first half. That's unusually bad for any team.

Give credit where credit is due though, OU played an amazing game on both ends of the court. While Syracuse still shot a high percentage, they were harassed, forced into committing turnovers and taking a few bad shots.

A more in-depth preview will hopefully get posted sometime tomorrow. For now, here's my initial thoughts:

I think the key to the game will be slowing down the tempo and limiting the possessions. UNC's offense is so efficient that you need to limit their opportunities. A frenetic game will give them more opportunities and that's bad - it gives them more chances to score (which they do well). Their KenPom adjusted tempo is 6th in the country. Obviously, OU should fast break when they can, but getting the game into more half-court sets and then getting back on defense quickly after misses could be the right strategy. You stand a better chance of defending them if you are able to square up to them defensively, rather than let them run their fastbreak offense. Slowing down the tempo will hopefully minimize turnovers. I think that the Griffins would work well in the post in a half-court set. Blake should win the battles down low.

In any event it will be an interesting game. While I think it will be tough to beat the Heels, they call it March Madness for a reason and our team has certainly proved they are a contender.