Sooners Cut The `Cuse Loose Moving On To Elite 8

Share All sharing options for: Sooners Cut The `Cuse Loose Moving On To Elite 8

The vaunted Syracuse 2-3 zone was just about as effective at defending Oklahoma as Brady Morningstar trying to defend Willie Warren. To crack the code Oklahoma needed one of their guards to step up and have a huge game and while Warren and Johnson were top choices to make it happen it was Tony Crocker who decided to literally come from no where by scoring a career-high 28 points to lead OU to a Sweet 16 victory over Syracuse that wasn't as close as the final 84-71 score.

Crocker shot 6-11 from three-point range softening the zone enough for Blake Griffin to drop 30 points. With all the pre-game discussion about how Oklahoma would manage to produce points against a stifling Syracuse defense it was the Orange who struggled to score against Oklahoma's ball pressure instead. Oklahoma forced 18 Syracuse turnovers and turned them into 32 Sooner points. 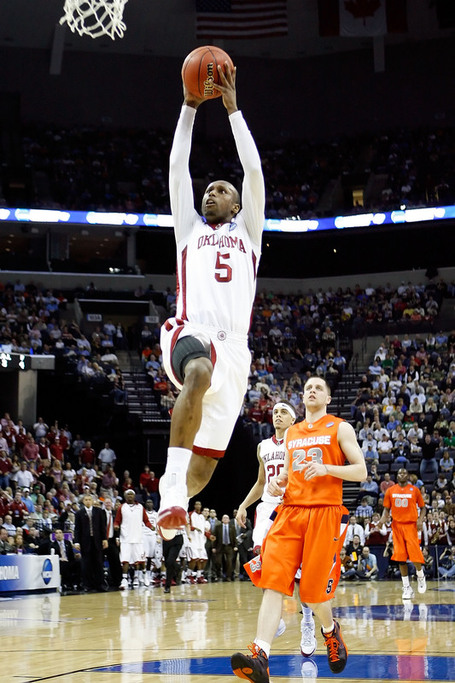 Welcome back to the basketball season, Tony!

Tony Crocker hasn't had a double digit scoring performance since his 14 point performance against Texas on February 22nd. He couldn't have picked a better time to get his stroke back either. You would have thought going into the game that the Sooners were the underdogs with all the talk of a possible Big East Final Four. Crocker helped Oklahoma put that talk to bed as the Big East no longer has a representative in the South Region.

If Oklahoma's guards can continue to produce like they did against Syracuse (45 points) then the Sooners are going to be almost impossible to stop. The great thing is that with Austin Johnson and Willie Warren there are three different players who could possibly have a similar performance. The frustration is when none of them have a hot night. If the first three games of the tournament are any indication of the mentality of this team then I would say they have regained their mid-season form. As Syracuse learned Friday night, that makes them very dangerous.

What The Syracuse Fans Are Saying

Our favorite Syracuse blog is silent on the loss so far but here's a sample of what their fans are saying. You can follow the entire thread by clicking the link above but there's a strong language warning. 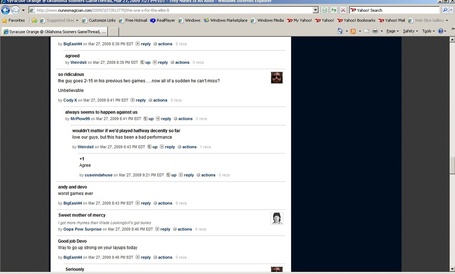 What The MSM Is Saying