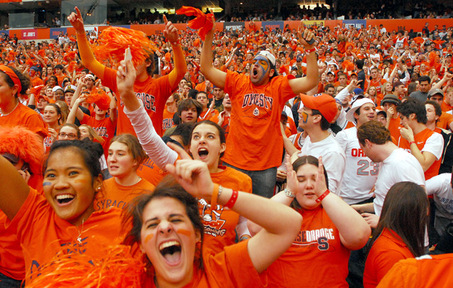 Oklahoma advanced to the Sweet 16 with a 73-63 win over Michigan on Saturday afternoon. It was the first time OU has advanced to the Sweet 16 since Kelvin Sampson's 2002-2003 squad went to the Elite Eight. Coincidentally, that year the Sooners met Syracuse and the Orange went on to win the national championship with Carmelo Anthony, Hakim Warrick, and crew.

For Syracuse, this is the first Sweet 16 since 2004. Basically this will be a matchup of two squads that have been a bit disappointing in recent years, and have both had Sweet 16 droughts of at least 5 years. However, both programs are historically good (give the edge to Syracuse on basketball history though).

Of the teams in the South Region, Oklahoma has the shortest travel distance despite the committee usually trying to protect the 1 seed. Oklahoma is the closest, North Carolina has a bit more travel, and Gonzaga and Syracuse both have long trips. Anyways, that's a story that people like to play up a lot, but a historical GIS analysis says it's really not that important.

It will be a matchup of a veteran coach (Jim Boeheim who has coached at Syracuse since 1976) and a new coach (Jeff Capel, one of the younger coaches in Division I). It will also be one of four (yes four - how boring) 2 seed vs. 3 seed matchups. In fact, without considering a 5 seed over a 4 seed an upset, there will only really be one Cinderella team in the Sweet 16 this year - 12 seed Arizona in the Midwest bracket. There were some first round upsets, but it all evened out by the Sweet 16, so there are a lot of heavyweight matchups - OU vs. Syracuse will be no different.

Getting To Know The Orange

Syracuse features an experienced rotation of players. Rautins has started for most of the year, but in the tournament, Boeheim has brought him off the bench (for significant minutes) anyways, while starting Rick Jackson. Really, the players that will make an impact are the 5 starters and Rautins, who have all had about 30 minutes per game or more in the tournament so far. The bench has not been used much at all for the entire year, but has been used even less so down the stretch and in the tournament. For the entire season, from the KenPom site, the bench minutes are at about 24%, which is good for a dismal 312th in Division 1. Flynn and Devendorf basically play the entire game.

Interesting stat to illustrate the minutes the starters play: Jonny Flynn has played 1,339 minutes this season, an average of 37.1 per game. Only John Wallace (1,379), Lazarus Sims (1,352) and Sherman Douglas (1,348) have played more minutes in a single season at Syracuse. (courtesy of syracuse.com)

Their guards are their playmakers and Devendorf has had the hot hand lately. He's scored at least 20 points in 4 of the last 5 games - a stretch that basically includes the Big East and NCAA tournaments. In fact, Jonny Flynn really is the heart and soul of the team. People can talk about Devendorf and Rautins hitting treys, but Flynn leads the team in scoring and minutes, and Syracuse is 14-2 when he shoots 50% or better from the field. Anyone who watched the Greatest Game Ever knows how good Flynn has been for Syracuse this year.

Surprisingly, the Orange and the Sooners seem remarkably similar with regards to weaknesses. Both teams rely heavily on starters, both have trouble with turnover margins, both miss a fair number of free throws, and both get the ball stolen a fair amount when pressed.

The Orange play a 2-3 matchup zone which has been their trademark under Jim Boeheim. This causes some problems for some teams who simply don't gameplan to beat it enough. Back in 2003, this was the case as Syracuse blew out OU in the Elite Eight. Hopefully Capel comes up with a more imaginative gameplan than Sampson did. However, the 2-3 zone (and any zone for that matter) makes teams vulnerable to giving up offensive rebounds. This has been the case all year with Syracuse, and showed early on against Arizona State. Unforunately for the Sun Devils, they shot way too many contested threes, and that's why they lost.

The Sooners have played one team this year (at least one competitive team) that played exclusively zone - Michigan. As would be suspected, Blake Griffin was a monster on the glass (15 rebounds). Not only that, but the Michigan zone was exposed when deceptively fast wing players were able to penetrate and kick a bit - most notably Taylor Griffin.

Finally, the Orange are susceptable to turnovers. There is nobody on the roster with better than a 2 to 1 assist to turnover ratio on the year. OU executed the press pretty well against Michigan at times, and created some errors from the Wolverines.