Share All sharing options for: Bedlam Recap: What The Heck Just Happened? 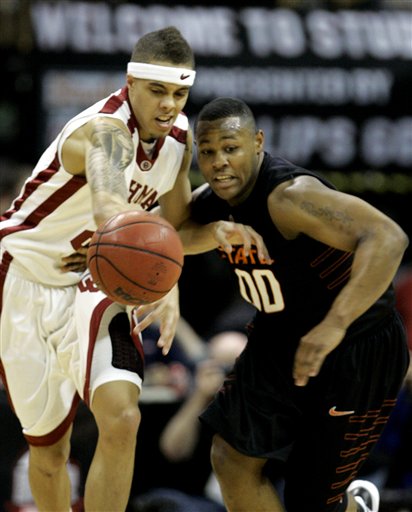 Austin Johnson and Byron Eaton battle for a loose ball. Picture courtesy of the AP and espn.com

It's 70-69 Oklahoma over Oklahoma State. Byron Eaton misses a shot. 2.3 seconds remain on the clock. Blake Griffin skies for a rebound. James Anderson of OSU comes flying in to fight for the board and a whistle sounds. Everybody turns to the ref. Foul on Blake Griffin.
The officiating in this game was inconsistent at best. In the crucial moments of the game, they called a foul, but against the player who didn't initiate the contact. Going straight up for a rebound and being run into by an opposing player does not qualify as a foul.
But that's not the reason OU lost this game. The game was decided well before then, as we allowed Oklahoma State to hang around way too long. The reason OU lost this game comes down to a little six letter word:

Effort (n.) - exertion of physical or mental power, OR an earnest or strenuous attempt, OR something done by exertion or hard work. --Dictionary.com

Our guys didn't try hard at all. They were lazy. Oklahoma State tried extremely hard. They had their hands on their knees at the end of the game. They battled every possession. OU was sloppy and lazy. They seemed indifferent about everything. Nobody who watched that game could honestly say that OU put forth an earnest effort. Based on pure talent, OU is probably one of the best teams in the country, top 10 at least. But lately they have played terribly. When an extremely talented team underachieves, it has to do with a lack of effort and bad teamwork. Time for a few key moments in the game:

This was an excellent example I think of how I think OU seems to think they can coast to victory. Before this play, Willie was talking with Byron Eaton and they were clearly talking trash. Willie took this shot only 13 seconds into the shot clock, basically right after the ball crossed half court. It was crunch time, probably an NBA range three, but Willie thought that he had to one-up Byron. It was a stupid shot with a tie game and plenty of time to set up some offense.

Two clutch free throws would have put us up by 2, rather than at a 64-64 tie. Still, it is hard to fault free throw shooting tonight when we were 17-22 from the line (.772), well above our season average. Nevertheless, it hurts to watch two free throws miss with under 4 minutes remaining.
Anyways, it seemed like OU got to the point where the buzz built. They were a lock for the #1 seed if they could win in Texas. Everyone was singing their praises. And when that happened, I think they thought they could just coast the rest of the way and not try. Teams that put forth effort don't turn the ball over 19 times (like we did tonight). Teams that put forth effort don't commit stupid reaching fouls and then act surprised when it happens. Teams that put forth effort don't let a guy drive uncontested to about 10-15 feet away from the hoop and then drill an open jumper. Teams that put forth effort extend their perimeter defense against a three point shooting squad.
It is all about effort. OU deserved this loss because they put forth poor effort. And effort will take OU as far as they want in the tournament. But the players have to buy into trying.
No effort, and I bet we will be eliminated in the 2nd round.
In the meantime, the teams putting forth effort have advanced in the Big 12 Tournament. It's hard not to admire Baylor and Texas Tech. They need to win their games and they are finding ways to win them. Texas Tech made a 22 point comeback in the 2nd half against Texas A&M.
That is effort. I wish I had seen some in Norman recently.

OU's tournament prospects will be on the way in an upcoming post. That should discuss seeding potential, who we would want to see win in the remainder of the conference tournaments, and a few tidbits about the NCAA tournament.