OU Football Spring Preview Part One: Who Is and Isn't Back, Exciting New Players

Share All sharing options for: OU Football Spring Preview Part One: Who Is and Isn't Back, Exciting New Players 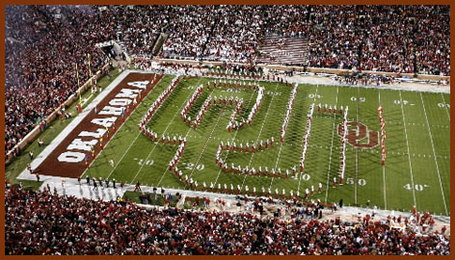 Isn't that a beautiful sight? Owen Field filled to capacity, waiting to watch the OU football team take the field. I know we are in the middle of two remarkable basketball seasons (men's and women's), but it's time to start previewing the football team as the Red-White game will be approaching, and Spring practice has already started. Now, with the tournament starting soon, these may not be regular installments, but I will link to previous versions of these previews in the latest preview that I post. Eventually, when I end, there should be a series of links at the top of that post, and you can explore all of my spring previews.

Here's how it will work: I will post articles throughout the offseason (starting now and lasting possibly through May), and eventually we should have a nice overall view of how the football team is shaping up.

In order to go anywhere with this preview, first we need to understand what pieces will be missing from last year. This will be the "logistical" part of the preview - who is and is not back, who redshirted last year, etc. etc.

All the good stuff after the jump...

Obviously, what jumps out is that we lost almost our entire starting offensive line, our two starting wide receivers and our two starting safeties. We'll delve more into this when I talk about how we're going to fill the holes in our team from last year and graduations. However, I'll offer a few thoughts on these issues:

First, wide receivers are relatively easy to replace. It's not like in the Stoops era that OU has had an absolutely incredible stable of wideouts. On the contrary, I would argue we have had a stable of running backs, and a ton of really solid wideouts. Even 2 and 3 star recruits at WR pan out to be solid for the Sooners. Quentin Chaney was a 3 star recruit. Juaquin Iglesias was a 2 star recruit. Plus, we have some pretty solid guys waiting in the wings. Like I said, more on that in a later issue.

We have some awesome recruits waiting to compete for the safety spots. That's not really a concern. In fact our defense is loaded. All of that in later issues. Most concerning about these losses is the offensive line. It's not easy to replace such a bulky, athletic and talented offensive line overnight. It's probably the most unheralded position on the field except maybe the punter, but I think our offensive line was the big reason why our offense put up such astronomical numbers last season. Bradford rarely got touched, and we could pick apart defenses.

We had a few redshirts last year (19 to be exact). Here they are:

Obviously we know about what we're getting from guys who were on the field regularly. But there's some new recruits or redshirts from last year who you should keep an eye on, especially in the spring game:

DE R.J. Washington - This guy was a 5 star recruit coming out of Keller, Texas. He was redshirted last year, but everyone was real excited about him. I'm not sure how much of the field he'll see with really only one DE graduating, but I would expect to see him become a part of the rotation. Here's some YouTube highlights.

WR's Jameel Owens and DeJuan Miller - Both of these guys were recruited last year as well. They both have good size. Owens is 6'3" 210 and Miller is 6'5" 200. While Ryan Broyles will be one of the obvious starters, and upperclassmen Adron Tennell and Brandon Caleb will be given every opportunity to win the other spot, I would expect to see both of these guys challenge for significant playing time and/or a starting spot. They were both 4 star recruits, so both of them have the talent to be big impact receivers. I would expect one of them to step up big time and impress.

S Quinton Carter - He isn't really new, but I would love to see him step up. In the playing time he did get, he was sort of a spark plug. He hits hard and would play well as a strong safety I think. We're going to need a centerfielder out there with a little bit more range and fluid hips in and out of turns, but I liked what I saw of Carter last year. Here are some samples of his work:

Ben Habern, Stephen Good and Jarvis Jones - All of these offensive lineman were highly rated in recruiting services. Jarvis Jones was a starter at LSU as a freshman before he transferred to OU. They all have the size to be successful in Division 1 college football, but will their skills transfer? If so, our offensive line could be almost as good as it was last year, which was basically untouchable.

RB Jermie Calhoun and RB Justin Johnson - Both of these guys were 5 star running back recruits last year. With Murray, Brown and Madu, they didn't get any playing time last year. However, they are both obviously very talented, and the majority of the buzz has been about Calhoun (he hasn't seen the field at all, he was redshirted). With the possibility of Mossis Madu moving to WR, that could open up the possibility of one of these guys sliding into 3rd down back or quality depth back role. I'm particularly excited to see Calhoun finally.

If a lot of those guys step up and help fill in major roles vacated by departing players, I think we'll be close to last year's level of competitiveness. We are returning a lot of starters, especially on defense.

The next spring preview issue should involve the major holes that have opened up, and the players that we should expect to step up and fill in these roles.