Share All sharing options for: Griffin/Crocker Push Sooners Past Buffs 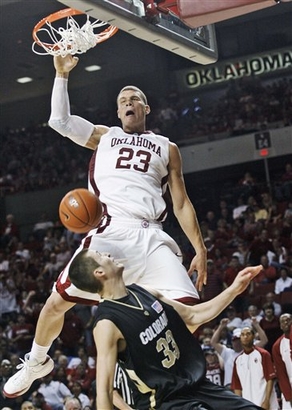 I Apologize for the Game Thread Not Appearing In The Appropriate Place. In My Haste I Published It Incorrectly. My Bad!

There’s been a Tony Crocker sighting in ! At times on Saturday it was hard to tell where Blake Griffin ended and Tony Crocker started. The duo combined to score 50 of ’s 77 points. Blake made his first nine shots on his was to 26 points while Crocker made a career high 7 three-point shots and scored 24 total points helping OU win 77-72.

’s record improved to 23-1 on the season and a perfect 9-0 in conference play. Possibly even more important than that is the confidence that this team has shown in themselves over the last few games. The Sooners are proving that they are much more than just a one man show and that they have already made it further than what Blake Griffin would have been able to take them by himself. Earlier in the season it was Austin Johnson stepping up to be reckoned with, then Willie Warren and now Tony Crocker. While Blake Griffin may be the best first option in the country ’s other options are too shabby either. There are more than just a couple of guys on this team who can drop off 20+ points on any given night.

Blake Griffin collected a mind blowing 20th double/double on Saturday as well. He has the Sooners flirting with a conference championship and a #1 seed in the NCAA tournament. However, he won’t be the catalysis to a deep run for the Sooners. It will continue to be the play of the guards where Crocker, Johnson or Warren will have to continue to step up in a big way. Also, the x-factor on this team is clearly Juan Pattillo who adds a physical defensive presence inside. Pattillo followed up a great performance Wednesday night with 8 points and 3 blocked shots.

Now, with all of that said focus remains the big challenge this season as OU is going to get everyone’s best night in and out. It seems like sleepwalking becomes more and more difficult to overcome with each win they add to their record. This coming week’s challenges will include a road trip to Baylor on Wednesday and a visit from Texas Tech on Saturday.