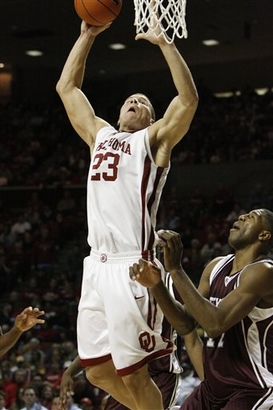 When I say my prayers tonight I’m going to be especially thankful for Juan Pattillo. As good as Blake Griffin and Willie Warren have been it Pattillo’s play that has put this team over the top in my opinion and he was certainly ’s savior Wednesday night. Pattillo had four critical blocks and supplied seven points to spark OU’s 77-71 come from behind victory.

I said in the preview that OU would struggle against an Aggies squad that was desperately playing with nothing to lose. This is a trend that will continue throughout the season as the Sooners face bubble teams fighting for survival. Road trips to , and look huge right now as the Longhorns are the only team from that trio that would be a shoe in at this point with the Bears and Tigers very close.

To win those games as well as others on the schedule OU is going to have to quit letting their foot off the gas as they did against on Saturday and then again with A&M on Wednesday night. This is the time of the season for teams that make a deep run in March to heat up. Not run on cruise control. ’s most dangerous opponent from here on out may be themselves as they struggle not to become victims of their own success.

Where The Game Could Have Been Lost

Missed Free Throws – left 9 points at the charity stripe tonight. You just can’t help but think that at some point this is going to cost them again. Anyone remember ? missed 11 free throws that night and lost by 9.

Poor Outside Shooting – I said that this game could have been decided by the guards and OU’s guards almost shot the Sooners out of the game. went 5-15 from three-point range.

Rebounds – OU got whipped on the glass! Texas A&M had a 43-30 rebounding advantage and it was actually much worse than that when you consider the second chance points where A&M had a 22-6 advantage.

Where The Game Was Won

Bench Points – OU’s bench produced 22 points giving the Sooners the extra boost that they needed to get the victory. The Sooner bench was led by Cade Davis who finally found his stroke again and scored 9 points on 3-5 shooting from three-point range.

Defense – blocked five shots, had six steals and forced A&M into 14 turnovers while also holding the Aggies without a field goal for the final 5:36 of the game.

Juan Pattillo – Pattillo drew A&M’s Chinemelu Elonu and had back-to-back blocks on a Josh Carter dunk and Donald Sloan layup late to give him his four blocks. His presence inside forced the Aggies to shoot from outside down the stretch resulting in the A&M scoring drought to close out the game.