Share All sharing options for: Griffin Returns To Lineup But Sooners Still Incomplete 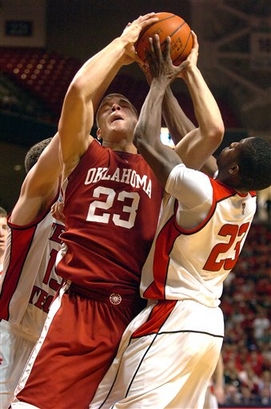 In Blake Griffin's return to the basketball floor on Saturday afternoon he was outscored by his brother. That isn't a by any means a bad thing though because Taylor's 22 points were just two better than Blake's. Throw in a combined 27 rebounds and the Griffin brothers punished Texas Tech for 42 points and 27 rebounds in leading the Sooners to a 78-63 road victory in Lubbock. It was the victory that OU was in desperate need of after dropping their biggest two games of the season but it was also a victory that left some significant questions to be answered.

Where is this team mentally? With any measure of success comes a certain amount of arrogance. A championship coach has to be able to manage a team's mentality as much as he manages the team's personnel. More than once today Oklahoma seemed to just be going through the motions. Credit Jeff Capel for getting them back on track during the final 10 minutes of the game.

When will we see the killer mentality? For the most part it's difficult to find things to criticize this team for and this question really ties in with the first one. Oklahoma led the entire way but failed to put the Red Raiders away until their run to close out the game. When the Sooners have an opportunity to put a team away they must capitalize on it. In order to do that they must maintain their intensity and become consistent on both ends of the floor. Right now they are allowing themselves to relax when they build a lead which leads to sloppy play resulting in turnovers and runs for their opponents. We saw examples of both of these against Tech when Oklahoma turned the ball over 14 times and saw their lead dwindle down to just one point in the second half before putting their foot back on the gas around the 10-minute mark.

What is going on with Willie Warren? He is most definitely in Jeff Capel's doghouse and it was a game time decision to take him out of the starting lineup. He only saw 12 minutes of action and was 0-3 from the floor. The last thing that this team needs at this point of the season is any kind of drawn out confrontation between a player and a coach. Incidents like this both develop and show character. Willie Warren has been an excellent addition to the team and has become an iatrical part of the team's makeup. I'm hoping that he makes the right decision to correct whatever the problem is between himself and the coach.

Adversity doesn't always wear an opponent's uniform. At full strength OU has been dominant over opposing teams but now it seems that they are going to overcome the toughest opponent they've seen all season if they want to make a deep run into the tournament. They are going to have to overcome themselves and become a cohesive unit again. Led by Blake Griffin OU returned to winning again but until Juan Pattillo is back in uniform and Willie Warren is out of the doghouse the team won't be completely back together.