Things To Fix and Thoughts On The Tournament

Share All sharing options for: Things To Fix and Thoughts On The Tournament

Adversity causes some men to break; others to break records. --William A. Ward

The Oklahoma basketball team has experienced some adversity lately. Hopefully, they are going into the stretch run with the mindset of William A. Ward, who was a sportswriter many many years ago. We shall see how it all plays out, but a solid win today would go a long way towards putting some of that adversity behind them.

In any event, the stretch run got me thinking about the tournament, and how the Sooners can avoid an upset. Every team has certain weaknesses, and a big part of the tournament is who you draw - not just the particular region, but the subregionals of 4 or 8 teams that you get lumped together with. If there are a couple of bad matchups for a team in their subregional, that's when they get upset.

The weaknesses and more thoughts after the jump (click the link below).

Our defense isn't terrible, it really isn't (or we wouldn't have only 3 losses right now). However, it is a weakness of our team (relative to everything else we have going for us). I think the biggest problem is we don't necessarily always play 40 minutes of defense. We hit slumps of like 10 to 15 minutes where a team can make a run on us. And usually it starts on the offensive end with a perceived bad call, missed layup, or some other problem that gets guys thinking about something other than the game.

Our KenPom defensive efficiency is 94.1, good for 56th in the country. This is BY FAR the worst among top-10 teams. If we play defense the way I know we can, for 40 minutes, we'll be much tougher. To be fair we are 26th nationally in FG% defense, which can probably be attributed to our length and athleticism (blocking or creating shot alters).

Using the KenPom scouting report again, it's also easy to see our other glaring weakness is the fact that we don't force that many turnovers. Our defensive turnover % is ranked 281st in the country (terrible), and our steal % is ranked 110th in the country (pretty bad). I think this is because we slide into a zone a lot of times, which actually works against us in another way (which I'll mention later).

It's very important to win the turnover battle, as evidenced by the last two games. The good news is that we don't turn the ball over very much at all. Austin Johnson is 10th nationally in assist/turnover ratio. That seems to compensate for the fact we don't force many turnovers, and why we win the turnover battle a lot. It's also concerning when we play teams like Mizzou who like to press and create turnovers. 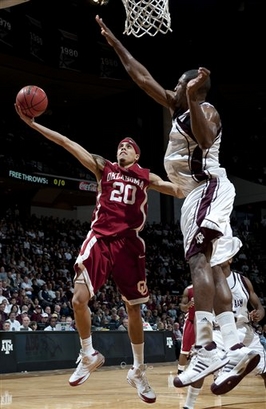 We Give Up A High Percentage Of Threes

Our 3P field goal % defense is only 200th nationally, pretty terrible. However, this is probably a product of a couple of things. First, we've run into some incredible shooters who have hit shots despite solid defense. Sherron Collins, AJ Abrams and Stephen Curry come to mind. These players were well defended but they hit contested shots. The other thing I think is the 2-3 zone. When we go into this sort of 2-3 trapping zone, the traps usually involve something on the wing between one of the two guys at the top of the defense, and one of the outside guys along the baseline. Sometimes, I think our defense shifts to the strong side too much and this leaves a guy too open on the other wing. I can remember one situation like that in the last game with Sherron Collins.

I do think that our defense does a great job of collapsing around guys who drive, which is probably why we usually outscore the other team in the paint, and get a lot of blocks and shot alterations. This leads into my thoughts about the tournament perfectly.

We Are Prone To An Upset By A Team With These Attributes:

Unfortunately, there are a lot of teams who upset in the tourney by using the 3 and their quickness to force turnovers. The good news is, I think if we take care of the ball and put forth 100% effort on the defensive end for the entire game, we can go deep in the tournament. Let's get Austin Johnson healthy again, and keep Blake healthy, and that should help a lot.