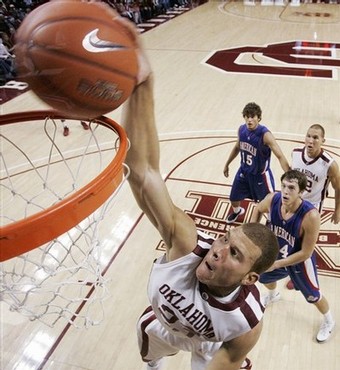 Image from daylife.com, which posted the AP Photo from Sue Ogrocki.

According to Fran Fraschilla during the Texas-Texas Tech game (which was alarmingly close), Blake Griffin's status for the Tech game on Saturday is expected to be made known on Thursday.

Of course if you're a fan of gossip and rumoring, there's a thread up on OUhoops.com that discusses this at length. There are a few people on there that claim they know he's been cleared to play. However, since nobody listed any credentials or official sources, I wouldn't take that as gospel just yet.

In any event, it sounds like we'll know sometime tomorrow. Boomer!