Share All sharing options for: Seniors Fail To Step Up - Sooners Lose 87-78 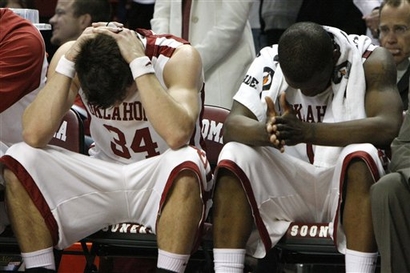 Davis and Warren left everything on the court while some of their teammates failed to give their best effort.

Oklahoma's last two games should have an asterisk beside them and they most likely will should the Sooners regain the same form they had before Blake Griffin left upon his return. However, with that said I think Griffin's absence exposed another problem on this team when it comes to leadership. That is there appears to be none among the upperclassmen. Seldom will you find me being so critical of a team that has done so much but I noticed something in watching the body language of Tony Crocker and Austin Johnson on Monday night. They have surrendered the leadership of this team to the younger guys.

Playing without their NCAA basketball Player of the Year candidate Oklahoma needed a warrior on the floor Monday night. They needed an experienced player who has already battled through adversity to lead the charge. Instead they got a freshman who played lights out, a cast of role players who let opportunity go right out the door and two seniors who looked like they needed to be, and eventually were, benched.

Of course I'm talking about Tony Crocker and Austin Johnson who have had very good careers as Sooners but certainly didn't appear to be up to the task of carrying the load for the team in Blake's absence. Johnson scored the games first two points but was virtually never heard from again. Crocker added 9 points but also turned the ball over three times and clearly appeared to be frustrated to the point where I believe he checked out of the game. At one point, during a timeout, he was so slow in getting off the floor that they started the huddle without him and when he finally made it over there is showed little interest in joining. Willie Warren was in need of a sidekick but there wasn't one to be found.

We thought that Ryan Wright might be an answer but in his first real opportunity on the big stage he showed the jitters of inexperience and missed 4 crucial free throws that could have helped bury Kansas early. In all he would miss 5 free throw attempts and not crack the scoring column all night. Meanwhile Willie Warren was, to use an old cliché, was on fire. He was the spark to Oklahoma building a 22-8 lead in the first ten and some change minutes of the game. Then at the 8:34 mark of the first half Warren was subbed out for Johnson and Kansas went on a 14-0 run and would never again relinquish the lead to the Sooners.

When Warren came back in the Kansas defense focused on him and at that point the world realized that even though he had four other teammates on the floor he was playing against Kansas alone. It was the opportunity of a lifetime for Johnson and Crocker. With Blake Griffin out with an injury they could have stepped into the limelight and stolen the show. Willie Warren had given them the defending national, and Big 12, champions on the ropes their own house in front of a national television audience and instead of capitalizing on the opportunity they pooped on the floor.

The cavalry finally came for the Sooners but it was too late. Trailing 58-38 with 10:40 left in the game, Jeff Capel subbed in Omar Leary and Cade Davis for Crocker and Johnson and the game changed dramatically. With what seemed to be the right personnel in the game OU was suddenly clicking and playing once again with heart. Oklahoma's bench produced 30 points in the second half to pump life back into a team that looked dead. They would cut the Kansas lead to three points twice but could never quite dig all the way out of the hole.

A final look at the stats would reveal just how close the Sooners were to knocking off the defending champions. OU had more points off turnovers than Kansas, 21-18. They were outscored in the paint by 5 (28-23) and Kansas had just 2 more second chance points (13-11) than the Sooners. They did everything they needed to in order to put themselves in position to win. When they look back at this I believe that there will be one glaring stat that stands out above all else though. Oklahoma lost by nine points on a night where they missed 11 free throws and 8 of those misses were from the starters.

To sum it up, Oklahoma was one Blake Griffin or two good seniors away from beating Kansas on Monday night. I guess it just depends on the way you look at it.