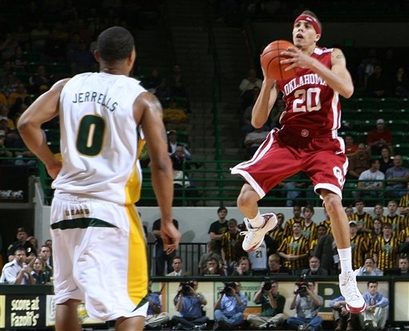 This is far from perfect form for a three-point shot but then again I bet AJ would kill in a game of h-o-r-s-e.

The last time Baylor beat Oklahoma in men's basketball I was three years old and many of this site's readers hadn't even been born. Since 1977 OU has gone 29-0 against the Baylor men's basketball team and Wednesday night they pushed it to 30-0 with an impressive performance.

The Sooners are used to seeing double-double performances this season but most of those types of nights are reserved for superstar Blake Griffin. Griffin got his numbers Wednesday night too earning his 21st double-double this season. He went 6-11 from the floor and added 6 more free throws to score 18 and added 12 boards. Now there's a new kid on the block in the double-double club. Juan Pattillo has steadily improved each game and Wednesday night etched his name on every opponent's player to watch list. Pattillo grabbed 10 rebounds and produced 14 points to earn his first career double-double as a Sooner.

Oklahoma turned a 5 point halftime lead into a 15 point 78-63 victory by flexing their muscle inside. Taylor Griffin added 8 points to Blake's 18 and Pattillo's 14 to stress the point that Oklahoma's forwards are deep, athletic and talented. The Sooners haven't been a one man show since last season despite what some are saying. Each week a different player seems to step up a take advantage of the attention Blake Griffin draws inside. Typically those players have been Willie Warren, Austin Johnson or Tony Crocker but Pattillo adds a different dynamic to that equation because it gives the Sooners another big playmaker under the basket. Having two bodies to worry about down low could, and should, make things a little easier for the guards. Austin Johnson and Willie Warren were more than willing to step up in Waco. They produced 17 and 14 points respectively and hopefully did their part to change the perception that this year's Sooner team is all big men with no real guard play.

Oklahoma improved to 24-1 and 10-0 in conference play inching ever so close to that coveted #1 seed in the Big Dance.